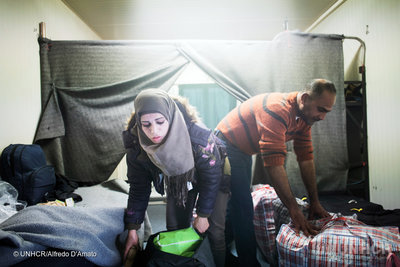 UNHCR, the UN Refugee Agency, is calling on Greek authorities to accelerate winter preparations for refugees and migrants in government-run sites on the Aegean Sea islands, where conditions are quickly deteriorating amid increased arrivals while harsh, rainy and cold weather is expected.

The pressure on overcrowded sites on the islands continued in September with nearly 5,000 new arrivals, resulting in hundreds of children, women and men having to sleep in small tents and shelter unsuitable for the winter. Sea arrivals to Greece this year have reached 20,000 and the majority were Syrian or Iraqi. Over half arrived since July and most were comprised of family or other vulnerable groups.

The recent rise in arrivals has further strained Greece’s hosting capacity on the islands. The situation is particularly critical at the Reception and Identification Centres, or ‘hotspots,’ on Samos and Lesvos islands, where 7,000 refugees and migrants are crammed into a combined space for 2,000.

UNHCR has been gradually reducing its engagement on the islands, including shelter provision and infrastructure improvement in the hotspots, as national institutions have assumed most services and following assurances by the Greek government and the EU of increasing capacity.

But Leclerc stressed that in view of needs, UNHCR, which works closely with the Ministry for Migration Policy, “will continue to provide emergency relief items until stocks are depleted; places in the island accommodation scheme for the most vulnerable; and transfers to the mainland – of people authorised to go – to help alleviate the situation.”

UNHCR will make all efforts for its urban accommodation scheme to reach 22,000 places across Greece by year’s end, from the present 19,000. Where possible, UNHCR is increasing available apartment space on the islands and currently more than 1,000 places have been secured.

Fadi and his wife Samah packing their bags after been informed that they will be transferred from the Reception and Identification Centre on Chios to Athens. February 2017. -via UNHCR

Since June 2016, UNHCR has helped over 13,000 asylum seekers move to the mainland. A significant number of others, however, are waiting to complete lengthy processes on the islands without adequate shelter and access to sufficient services for extended periods. UNHCR advocates for faster implementation of the administrative procedures to allow for departure from the islands within a reasonable time.

In Samos’ Vathy hotspot, more than 1,200 people are staying in inadequate shelter, a third of them camping in very difficult conditions. Another 300, including families and unaccompanied children, are sleeping in small tents in the woods outside the reception centre, due to the lack of space and adequate services inside. In these circumstances, UNHCR is encouraging the local authorities and community to support expansion of urban accommodation on the island.

In Moria hotspot on Lesvos, more than 1,500 people are in makeshift shelters or tents without insulation, flooring or a heating unit. Many are families, pregnant women, people with disabilities, and very young children. UNHCR has installed 344 prefabricated housing units in the sites on Lesvos. However, there is scope for further expansion in the Kara Tepe site, where 750 asylum seekers are living and UNHCR calls on the Municipality of Lesvos to urgently increase its hosting capacity.

Overcrowding and poor conditions are also observed on Chios Island, while concerns are growing on Leros and Kos as sea arrivals continue.