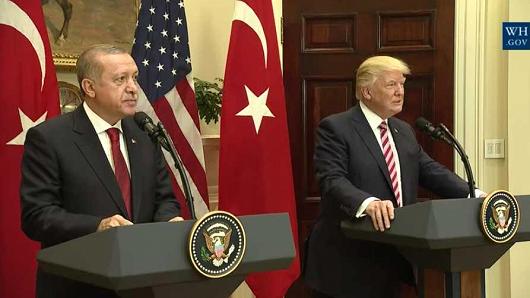 The Turkish Lira slid 2.5 percent and stocks tumbled 4 percent early on Oct. 9 after the United States and Turkey cut back visa services, signaling a sharp regression in diplomatic relations between the NATO allies. The U.S. mission in Turkey and subsequently the Turkish mission in Washington mutually scaled back visa services after a U.S. consulate employee was arrested in Turkey.

Last week, the local employee at the U.S. mission in Istanbul was arrested on charges of links to preacher Fetullah Gulen whom the Turkish government blames for last year’s failed coup.

“Recent events have forced the United States government to reassess the commitment of government of Turkey to the security of U.S. mission and personnel,” the mission in Ankara said in a statement.

“In order to minimise the number of visitors to our embassy and consulates while this assessment proceeds, effective immediately we have suspended all non-immigrant visa services at all U.S. diplomatic facilities in Turkey.”

The Turkish embassy in Washington followed suit, and made virtually the same statement, only replacing the country names.

The state-run Anadolu news agency identified the consulate employee as a male Turkish citizen and said he was arrested late on Wednesday on charges of espionage and attempts to damage the constitutional order and Turkey’s government.

Turkey has expressed deep frustration over its so far fruitless calls for the United States to extradite Fethullah Gulen over a failed July 2016 coup, in which more than 240 people were killed. Gulen denies any involvement.

Thousands of people have been detained in a crackdown since the failed coup, including American Christian missionary Andrew Brunson, who ran a small church in Izmir on Turkey’s western coast. The United States has said that Brunson has been wrongfully imprisoned and has called for him to be released.

Diplomatic relations between Turkey and the United States have particularly deteriorated since May, when Turkish security officials were involved in street fighting with protesters during a visit to Washington and were subsequently indicted.

In September, Turkey also protested the U.S. indictment of a former Turkish economy minister for conspiring to violate U.S. Iran sanctions, saying the charges amounted to a “coup attempt” through American courts.

On Oct. 8, the U.S. mission in Turkey suspended all non-immigrant visa services at U.S. diplomatic facilities in the country. The Turkish Embassy in Washington then followed suit, issuing a virtually identical statement but replacing the country names.

The lira also plunged to historic lows against the euro, hitting 4.49 early on Oct. 9 before recovering to 4.33.

The Istanbul Stock Exchange opened on Monday with a -3.7% drop.

Turkish media report of one more arrest order against a second employee at the US consulate in Istanbul.

Turkish Foreign Ministry in Ankara summoned the US Ambassador on Monday morning.