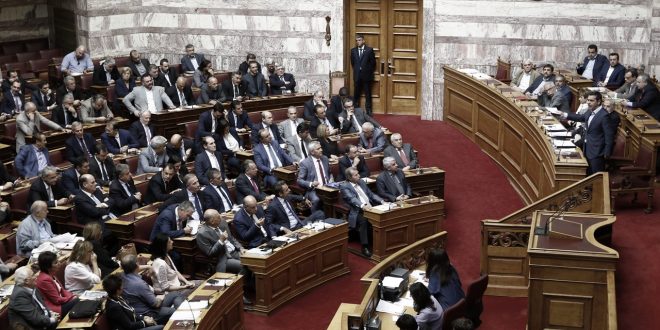 Parliament adopts Gender Change Bill amid a debated about aliens

Greek parliament approved the bill for gender change and legal identity despite the strong objections of the Greek Orthodox Church and amid a political debate on  Greek traditions, family and religious ideals, the “struggle against Turks in 1821” and … “aliens. The bill passed with the votes of SYRIZA and To Potami some from ANEL and some from Democratic Coalition (PASOK)

Several MPs from junior coalition partner Independent Greeks (ANEL) as well as one from SYRIZA down voted article 3.

During the heated debated in the Parliament, leader of conservative New Democracy, Kyriakos Mitsotakis brought an awkward example.

He claimed he talked with an expert, a psychiatrist, who told him “a young man told him he wanted to change his gender because an alien told him to do so while he was on the Hymettus Mountain.”

Of course, Mitsotakis’ story was not an awkward kind of joke but an attempt to humiliate the transgender people, claiming they need a psychiatric consultation.

Leader of Centrists’ Union, Vasilis Leventis, argued that one of the heroes of the national struggle against the Turks in 1821 would never vote for this bill.

“Papaflessas did not fight for this,” Leventis said in the plenary and shouted “These are abnormal things!”

Giorgos Mavrotas (TO POTAMI) revealed during his speech in the Plenary that several lawmakers were exposed to pressure to vote against the bill in order to bring down the government.

The bill removes medical diagnosis and surgery as criteria for the gender change. For under-aged the parents’ consent is needed.

The public debate on an issue that affects the lives of a minority of people was carried out in the usual Greek style: shouting, shouting and shouting and an  extraordinary performance of ignorance by both the politicians and the media. The usual argumentation of anti-bill supporters was allowing the registration of gender change was a violation of the Greek Orthodox morals -as if the bill would bring down the Greek national identity.

Many ordinary Greeks who had no idea about the bill or the issue in general were left with the impression that a 15-year-old would wake up on morning and would want to change his or her gender.

PS If I remember right, the same arguments were used when the government was to vote for civilian marriage and the cremation of the dead. Both bills passed and we still feel we are Greeks. 🙂