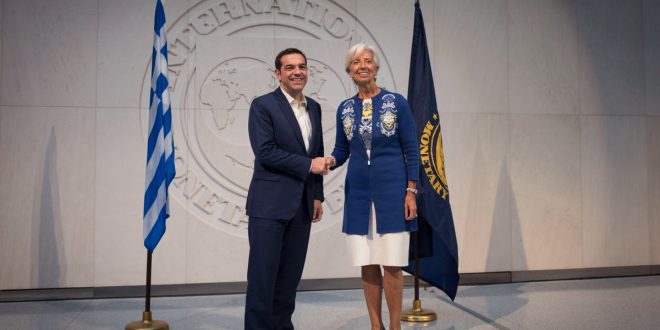 October 17, 2017 Greece, Politics Comments Off on “Debt relief essential for Greece to return to growth” says Lagarde at meeting with Tsipras 164 Views

Prime Minister Alexis Tsipras visited the International Monetary Fund and had a meeting with Managing Director Christine Lagarde in Washington DC. After the meeting, the Fund said Tsipras and Lagarde “are committed to working for Greece to return to growth and exit official financing next year.”  Tsipras said he is “happy to believe we have overcome disagreements, all want completion of  the third review as quickly as possible.”

In brief comments to the press, Lagarde said “I complimented him [PM Tsipras] and the Greek people on the notable progress Greece has achieved in the implementation of difficult policies, including recent pension and income tax reforms.”
Describing the meeting as “excellent and productive” she added that “the IMF recently approved in principle a new arrangement to support Greece’s policy program. Resolute implementation of this program, together with an agreement with Greece’s European partners on debt relief, are essential to support Greece’s return to sustainable growth and a successful exit from official financing next year. The Prime Minister and I are committed to working together towards this goal.”
On his side, Tsipras said they had the opportunity to discuss the short-term and long-term prospects of the Greek economy. “Greece has turned a page after years of stagnation” he stressed adding that “the efforts of its people are starting to pay off.”
He said there is a visible exit from the crisis and that it is in everyone’s interest to wrap up the third program review as quickly as possible.
“The completion of the review will allow the Greek economy to maintain its upward trend,” added noting that “the IMF will play an important role.”
Tsipras and Lagarde had a private meeting that lasted 20 minutes, other IMF’s officials joined the meeting afterwards.
The Greek Prime Minister tweeted: “the IMF will play a crucial role in the discussions for debt relief – so that the preconditions will be laid for sustainable access to the markets.”

It has not been revealed whether the Fund hinted if it finally made up its mind for participation in the Greek program.

PM Tsipras is scheduled to meet with US President Donald Trump at 07:00 pm (Greek time), a working lunch will follow. Joint statements are scheduled at 08:30 pm.