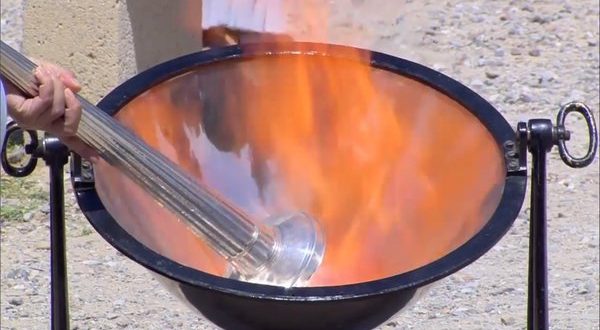 The flame for the Pyeong Chang Olympics was lit at the birthplace of the ancient Olympics on Tuesday, despite a brief cloudburst that disrupted the sun-reliant ceremony.

It launched a long torch relay that will culminate with the Winter Games Opening Ceremony on Feb. 9.

Using fire kept from a rehearsal, an actress playing an ancient pagan priestess ignited the torch in front of the 2,600-year-old Temple of Hera in the southern Greek Peloponnese region.

She then passed the flame to the first relay runner, Greek skier Apostolos Angelis, who ran with it for a short distance before handing over to former Manchester United soccer player Park Ji-sung, a South Korean.

From the verdant, rain-soaked valley of Ancient Olympia, where the Games of antiquity were held for more than a thousand years, the flame will course through Greece for eight days and reach South Korea on Nov. 1.

Despite tensions between the U.S. and North Korea — with which the south remains technically at war — organizers insist there is no fear for the Feb. 9-25 Winter Games.

“We want the international community to understand that we are committed to hosting a safe and secure” Games, organizing committee chief Lee Hee-beom said during Tuesday’s lighting ceremony.

The ski resort town of PyeongChang lies about 50 miles south of the world’s most heavily armed border that divides the two Koreas.

The International Olympic Committee has also stressed that there is no cause for concern. IOC president Thomas Bach made no direct reference to the tensions Tuesday, only saying during his speech that the Games “stand above and beyond all the differences that divide us.”

Normally, the flame-lighting ceremony involves the priestess offering a token prayer to the dead pagan gods of Olympia — a major ancient Greek sanctuary — before using a bowl-shaped mirror to focus the heat of the sun’s rays on her torch.

But with rain forcing officials to huddle under umbrellas, there was no hope.

Having goosebumps from watching the #OlympicFlame being lit in 🇬🇷?
Let the journey to @pyeongchang2018 start! 🔥@Olympics @HellenicOlympic pic.twitter.com/f8YY5IaVC6

THE @olympicflame 🔥🔥🔥 IS BACK! WHO ELSE IS READY FOR @pyeongchang2018🙋🏻 pic.twitter.com/bzBkWpu7NA

PS too bad Greek state and private media were on 48-hour strike and missed the coverage and the transmission of the once in four years event. Greek media are on strike from 6 am Tuesday until 6 am Thursday protesting the upcoming merge of their social security fund with the state fund.