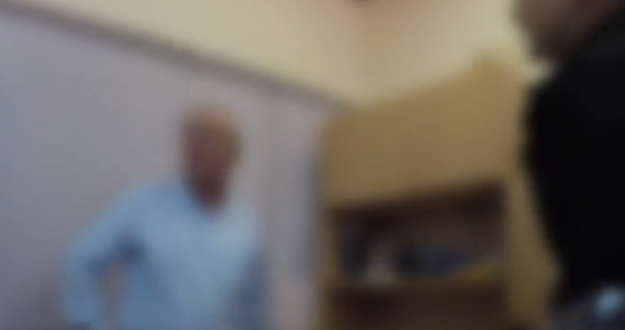 Members of the anarchist group Rouvikonas raided the office of a clinic director in Public Hospital Evaggelismos in downtown Athens on Wednesday. Accusing him of taking money under the hand (fakelaki) by patients, they threatened him they “would cut his hand off” if he would do it again.

In a video they shot during the “intervention” and uploaded on liveleak, the anarchists are heard saying they received complaints by patients that he would asked extra money (fakelaki) for surgeries.

The doctor asks who complained about him, the anarchists respond they cannot reveal the patients’ name and expose the complainer. They identify themselves as members of Rouvikonas.

“Why do you get fakelaki? Why do you take a advantage of the pain and the need of the other?” Rouvikonas members shout at the doctor and warn him “Next time we hear you asked for money, we will post your name and your picture all over the hospital.”

They continue their threats that turn more and more violent and yell at the hospital doctor “if you do not stop we will come outside your home and smash your head. If we would be arrested and go to jail, when we come out we will smash your head again. We will cut your hand, we will take the money out of the envelope and have you eat it. Are we clear?”

They hardly allow the doctor to speak out a word and before the footage ends they are heard saying “Next time we will not meet you at the hospital, we respect the place not you.”

The Rouvikonas footage has been re-posted on the websites of  several Greek media  that have apparently  blurred the footage and the images.

According to Skai TV, Greek Police investigates the original footage material in an effort to identify the Rouvikonas members although they had covered their faces.

In a statement the anarchist group said among others “it is in vain to expect from the state to clean” such phenomena.

The Chairwomann of the Union of Hospital Doctors, Matina Pagoni, condemned the unprecedented attack to the surgeon and said that “complaints [about fakelaki] should be eponymous. “Nowadays, all complaints are anonymous, but if they are eponymous and filed to disciplinary bodies whoever is responsible will be punished,” she said.

However, this is easier said than done. Patients are afraid that if they would make an eponymous complaint they will not receive the medical service they need.

Fakelaki (‘little envelope’) describes the notorious Greek habit notorious where a citizen stuffs money into an envelope and passes it under the table to civil servants in order to get public services. Fakelaki  helps to secure appointments and health services, to have documents, permits and licenses issued. Fakelaki is considered to be a plague for the economy as revenues from it are not declared in income declarations

According to Transparency International 13% of Greeks paid fakelaki (bribery in the form of envelopes with cash donations) in 2009, which was estimated to account for €787 million in yearly corruption payments.

Many Greeks had thought that Fakelaki would extinguish in times of economic crisis. In vain. It was only that the tariffs decreased. According to TI, fakelaki corruption fell down to 10.4 % in 2010. The total estimated sums  that changed hands under the table fell down to 623 million euro in 2010.

In 2012 the website edosafakelaki (I Paid a Bribe in Greece) was created for Greek citizens to anonymously report the payment of fakelaki. The site received over 1,000 reports in its first month of operation.  The website was created after its founder, Kristina Tremonti, was forced to pay a fakelaki on behalf of her 90-year-old grandfather, a war veteran with terminal cancer, who was left waiting for hours in the emergency room of a public hospital.

The site was active until mid of 2016. There are common Greeks writing their personal stories on having to pay a fakelaki are several for a surgery or a driving license. But there are also doctors who have admitted to have asked for the extra something.

For years, in public hospitals fakelaki was a must among surgeons and anesthesiologists. However, I must underline that not all doctors ask for the extra money under the table this. I know of surgeons who felt insulted when a patient asked about the ‘fakelaki tariff’. And I know of surgeons who have not asked for the extra something. Last time it was in a public hospital for a difficult surgery in 2015.