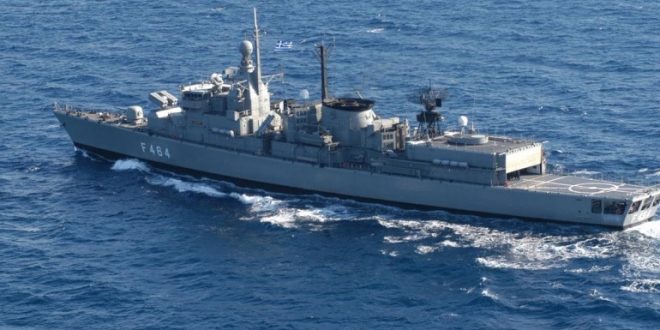 Greek Navy warship runs aground off the port of Piraeus

November 2, 2017 Greece Comments Off on Greek Navy warship runs aground off the port of Piraeus 428 Views

A warship of the Greek Navy run aground in the sea area where tanker Agia Zoni II sank beginning of September. In a statement, the Navy said that there have been no injuries neither fuel leakage into the sea.

Hellenic Navy frigate “Kanaris” run aground at 6:15 Thursday morning as it was sailing to the Naval base in Salamis. The accident occurred between the islets Atalanti and Psyttalia, close to the port of Piraeus and the island of Salamina.

According to a Navy statement, there is no water flow or fuel leakage and all officers and sailors are in good health.

“Kanaris” will be towed from the reef. However, before the detachment operation starts, divers are expected to check if there is a serious damage or other problems.

The Greek Coast Guard will assist in the detachment operation.

Tug boats are already in the area.

The Navy investigates the causes of the accident.

The reef in the area in known, therefore the question mark is: human error or technical problem?

It should be reminded that in the same area, off the islet of Atalanti, tanker Agia Zoni II sank beginning of September, causing a huge oil spill across the Athens Riviera. The tanker was anchored. Almost two months after the shipwreck the reasons remain unknown.

In a statement, the General Staff of the Greek Navy said among others that there has been no environmental pollution.