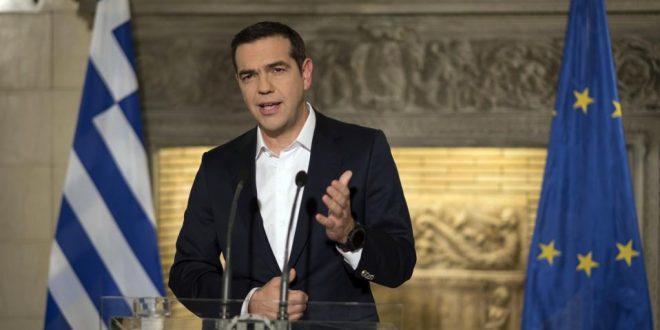 Stunned and with hanging jaws Greeks saw and heard Prime Minister Alexis Tsipras announcing that he will hand out 1.4 billion euros as one-off “social dividend” in December.

“The welfare benefits  totaling 1.4 billion euros, is more than double than that paid out last year (600 million euros) and this is made possible because of the outperformance of the economy,  Tsipras said in his extraordinary televised address on Monday night.

He opened his speech saying he was “in the pleasant position to announce today some important positive news. The Greek economy has been exceptionally positive for the second consecutive year”.

He listed the positive figures in the Greek economy as:

Tsipras said about 720 million euros would be distributed by mid-December to 3.4 million Greeks.

The social groups eligible for the social benefit are with priority the unemployed, the young, and the  low-income pensioners. The payments will be tax-free and will depend on income, assets and household size.

Another 315 million euros would be directed to pensioners to compensate them for the “illegal health contribution payments” in 2012-2016 as he said.

360 million euros would be paid to Greece’s Public Power Corporation (DEH) for the sake of the so-called ‘social tariffs’ and to prevent electricity tariff increases.”This will open the way for further reductions for the 300,000 beneficiaries of the reduced electricity bills.”

The relevant bill will be tabled to the Parliament next week.

Prime Minister Tsipras linked the social dividend with the surplus due to over-taxation and the impoverishment of the Greek households.

“Some social groups, the low-incomers and the middle class, have been disproportionately burdened with taxes, and have suffered great economic pressure in the last seven years,” he said adding “this was not only because the country’s bankruptcy forced us into a difficult fiscal adjustment, but also because of the fact that the country’s elite has shamelessly loaded the burden on so many people, evading taxes and gaining wealth in tax havens abroad.”

He made a review of the coalition government achievements “in favor of the many” and mentioned among others: the social income, the free meals in schools, the protection of the first residence, the integration of 2.5million uninsured into the national health system, the decrease in social security contributions for low incomers and the measures to combat undeclared labor.

Alexis Tsipras stressed that all these achievements were the “result of a tough and intensive effort, of a rationalization of spending without cuts in wages and the welfare state, but also a result of the decisive restriction of corruption, squander of public money and tax evasion.”

Why did he do it?

Many Greeks wondered why the Prime Minister chose this particular moment to announce the distribution of the social dividend and make a review of the government achievements.

Many wondered whether we are heading for early elections.

And some linked it to the second round of elections for the ‘center-left’ PASOK leadership on upcoming Sunday that threaten to steal voters from SYRIZA.

What about the lenders?

With talks about the second review under way, the Greek government has not much of a space to spend money without the lenders’ approval.

PS Whatever the reason why Tsipras made the announcement at this specific point, fact is that some people will receive a much anticipated and much needed extra bonus for Christmas.