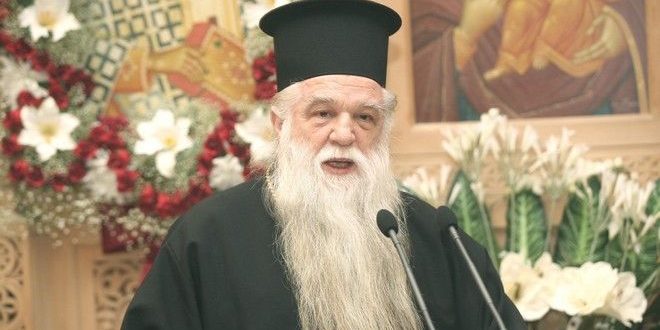 The Metropolit of Kalavryta and Aegialeia, Amvrosios, is to stand trial in March next year for inciting hate and violence against the gay community.  A prosecutor accepted the lawsuit filed against Amvrosios by nine citizens who are reportedly gay.

In 2015, Metropolit Amvrosios lashed out at homosexuals writing on his website “Spit on them! Deprecate them! Vote against them!” Reason the holy man‘s rant was a bill the Greek Palriament was voting about the so-called ‘civil partnership agreements’ for couples of the same sex.

Amvrosios, one of the toughest hardliners of the Greek orthodox Church and a powerful man, called them among others scums of society, outcasts, defective, humiliating,  people of darkness and the damned of the society.

In January 2016, nine gays filed a lawsuit against Ambvrosios for “inciting hate and violence” (law against racism) but in addition for “abuse of ecclesiastic office.” Article 196 of the Penal Code, provides that “a religious officer who during his work or publicly and in his capacity provokes or incites citizens to animosity against the political power or against other citizens  is punished with  imprisonment of up to three years. “

The lawsuit states that Metropolit Amvrosios clearly incited citizens to use violence against other citizens thus abusing his function as a public person. His statements were “an open invitation for lynching us”.

The lawsuit was upheld by a prosecutors, who referred Amvrosios to trial and set the date for 15. March 2018 in a court of Aigio town in North Peloponnese.