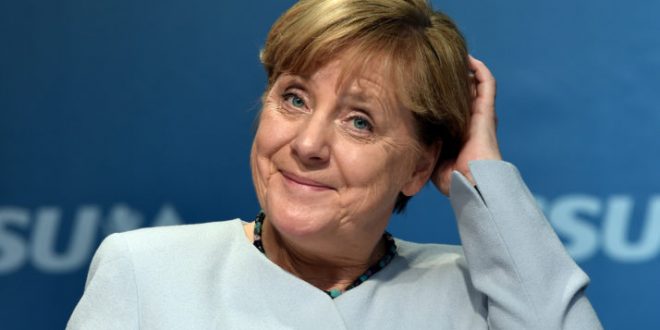 Merkel fails in coalition talks, she may lead Germany to snap elections

November 20, 2017 Politics, World Comments Off on Merkel fails in coalition talks, she may lead Germany to snap elections 228 Views

The era of German Chancellor Angela Merkel nears the end.  Even if she wins the next elections, her opponents within her own party will grill her over hot charcoal. Preliminary coalition talks between Chancellor Merkel and the Greens and the FDP collapsed early Monday after two months. It was mainly the neo-liberal FDP  that withdrew from the talks without naming a reason.

Later on Monday, the SPD, Merkel’s coalition partners until September, rejected the Chancellor offer to begin talks for a coalition. The scenario of a minority government has no perspective for the future.

After speaking with President Steinmeier, Merkel said she was ready to lead her party to fresh elections.

German Chancellor Angela Merkel announced on Monday that she was ready to take her Christian Democratic (CDU) party into fresh elections after coalition talks with the Green party and pro-business Free Democrats (FDP) failed over the weekend.

“I’m very skeptical,” about leading a minority government, Merkel told public broadcaster ZDF. The center-right politician said that she was ready to lead Germany for four more years, but that she felt a majority government was necessary for stability in Germany and Europe.

Merkel’s statement does not necessarily mean Germany is headed for snap elections. First, President Frank-Walter Steinmeier will approach other parties to see if a last-ditch coalition can be cobbled together.

Several hours ahead of Merkel’s comments, President Steinmeier appeared to rule out snap elections for now, instead emphasizing the obligation each party had to the voters. to reconsider whether they might not be able to create a working majority.

That was a reference to fresh elections. If no majority coalition emerges, Steinmeier is bound by the German constitution to nominate a chancellor for approval by the German parliament, the Bundestag. If no stable government can be formed after three rounds of voting there, the president would have to ask Germans to return to the polls.

That’s a possibility that Steinmeier wants to avoid. Steinmeier said he would be holding talks with various leaders of the political parties in an attempt to broker an agreement.

But given the political landscape in German, such a breakthrough seems highly unlikely.

According to German media, the country would most likely head for snap elections. These could take place in 3 months. And another 2-3 months for coalition government talks.

It is the fist time the most powerful woman in EU and the world and her conservative Christian-Democrats fall victim to their own policies although they won the elections.

Both the FDP and the SPD hope to gain votes in new elections. And so does the right-wing radicals of AfD. The voters’ pool of the FDP is the AfD, media note.

PS We should rush to neighborhood bunkers to avoid the next bombardment of FDP and AFD and CSU anti-migrant,, anti-Greek, anti-everythin far-right crescendo in the next elections period.