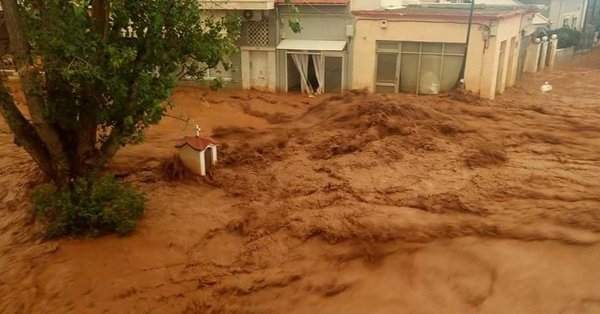 The Metropolit of Kavryta is not only an specialist on spiritual issues and Greek Orthodoxy. He is obviously an expert in natural disasters like the flash floods that hit West Attica on November 15th.  And he know why they happened: Because Greece is run by an atheist Prime Minister and many atheist ministers!

In his personal blog, Metropolit Amvosios makes an anathema for this disaster “to this atheist state in which we live today, with the prime minister and many ministers who have declared that they are atheists.”

He complains also that he was not invited to television panels about the flash floods and underlines that “a representative of God, so that the point of view of the Church could be heard! And yet, the Church’s view is the most valid when such phenomena are being evaluated.”

He urged the faithful [and the atheists] to open the New Testament “if there is any hidden somewhere in a cupboard or a drawer” and read Matthew 24:6-8.

“There some extraordinary natural phenomena that will be devastating are being described. For example, hunger and earthquake that will cause disasters,” Amvrosios writes adding “To these we have to include also the floods. All this will expresses the wrath of the Creator for the apostasy of His creation, that is of the man.”
There are described some extraordinary natural phenomena, which will be devastating! For example, hunger and earthquakes that will cause disasters in the natural environment! Among these we have to include the squeezes. All this will express the wrath of God Creator for the apostasy of His creation, the man, from Him.”

PS I suppose Matthew did not include flash floods in his Gospel because at that times there was no illegal construction and human intervention in the natural flow of rivers and streams. But these are engineers claiming that. And they mos probably also atheists.