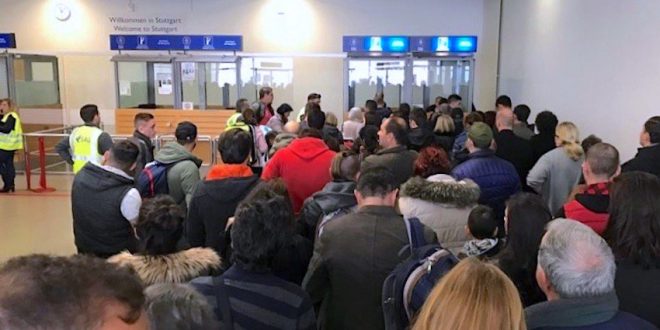 Flights from Greece: Berlin agrees to limit controls at German airports to travel documents only

Germany, Greece and the European Commission have reached an agreement on the control procedure at German airports for passengers arriving from Greece. The agreement was reach in a trilateral meeting in Brussels.

Commission spokeswoman Natasha Bertaud said that Germany has agreed that from now on passport controls for passengers coming from Greece will take place at the gate within the Schengen zone and passengers will not be transferred to non-Schengen areas. Furthermore, the controls will be limited to the identity and validity of the travel documents.

Since November 12, when the German Interior Ministry started to implement the suspension of  Schengen agreement, passengers coming from Greece had to undergo humiliating controls that included also opening their luggage and a short interrogation. They were driven in a bus to selected areas where they had to stand  long queues also in the cold. Procedures were so thorough and queues so long that passengers reported they had to wait even for more than one hour forcing some to miss their connecting flights or further transport.

A journalist who flew Athens to Edinburgh with a stopover to Frankfurt two days ago told ANT1 TV tonight that the passengers were taken to a special area in the company of policement who were holding cameras. One by one all passengers were ‘interrogated’ and the questions were about the purpose, duration and destination of the travel, whether they were planning to move to another Federal State. Generally but precisely speaking: they asked questions normally asked to non-Schengen and non-EU citizens.

Flight from Greece have been scrutinized as if they were coming from Turkey and Egypt,” German police sources admitted.

The ‘new’ passport control procedures triggered an outrage and Athens had submitted a demarche although the content was not a ‘strong wording.’

At the same time, Greek liaison officers will be stationed at airports of Frankfurt and Munich as of net week to help their German colleagues in identifying passengers with fake papers.

A “reciprocity” – so to say – as German policemen have been deployed in Greek airports since quite some time.

Germany’s interior ministry had complained that between January and October, around 1,000 people with falsified documents were intercepted at German airports after flying in from Greece.

According to the Greek police, German authorities had not given Greece any specific details on the hundreds allegedly found carrying false papers over the past 10 months, which could have enabled Athens to run background checks on them.

Nevertheless, the controls were extensive with many angry Greek passengers flooding the media with their complaints.

Officials from the ministry of citizen protection expressed their irritation on Wednesday at the extensive checks Greek nationals are subjected to in German airports, despite reassurances that these measures are temporary and discreet.

The officials told media that despite repeated talks between Alternate Citizen Protection Minister Nikos Toskas and German Interior Minister Thomas De Maiziere, the situation has not been improved.

In their talks, De Maiziere had promised that checks will be selective and will not affect EU citizens, as well as that they will be conducted within the Schengen control area of the airports and will be discreet.

PS In other words: Germany will have to stick to its commitment!