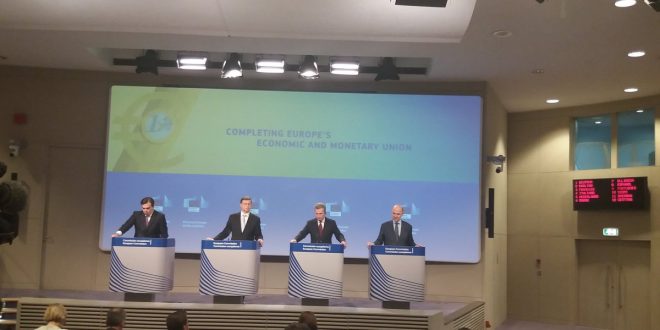 The European Commission unveiled its vision of a rebooted eurozone, including the creation of a European version of the IMF. The European Monetary Fund should be created by 2019.

The European Commission unveiled its vision of a rebooted eurozone on Wednesday, including the creation of a European version of the IMF, but stepped back from its more ambitious ideas amid misgivings from powerful Germany.

The ideas to be implemented by 2019 follow the heavily trailed state of the union speech by European Commission head Jean-Claude Juncker in September and are intended to inspire discussion at an EU summit on the future of the euro on December 15.

“After years of crisis, it’s now time to take Europe’s future into our own hands,” Juncker said in a statement. “There is no better time to fix the roof than when the sun is shining.”

The proposals by the commission, the EU’s executive, were originally billed to be the European Union’s answer to the shock of Brexit, but have been reduced in scope with member states split on the direction they should take.

“Only the commission is able to present concrete proposals for the euro area and the union as a whole, although some would have preferred it to do nothing,” EU Economic Affairs Commissioner Pierre Moscovici said at a news briefing, in a veiled reference to Germany and other naysayers.

The proposals also follow a laundry list of ideas set forth by French President Emmanuel Macron to strengthen the euro single currency, who worked under the assumption that Germany would have a pro-EU government installed to see them through.

Instead, the commission’s most concrete proposals are the least controversial, including the creation of a European Monetary Fund to be built from the eurozone’s existing bailout body, the European Stability Mechanism.

Other ideas, such as the creation of a eurozone finance minister or a rainy day budget for member states, are officially tabled for discussion by the commission, but without a formal proposal.

Leaked drafts of these ideas were met with fierce derision in German media, which loathe any EU project that might transfer German taxpayer money to poorer member states.

The climbdown will be a blow to Macron who has made reforming the eurozone, including with a proper eurozone budget, one of his top priorities.

Macron will still have a chance to make his case when the EU’s heads of state, minus Britain, discuss the reform plans at next week’s summit in Brussels. The original plan was to follow this up with a decision-making summit in June.

The commission’s proposals “are clearly not the end of the story,” an EU diplomat said on condition of anonymity.

Deputy spokesperson of the Commission, Mina Andreeeva, corrected some German media that claimed the Commission would be in full control of the EMF and not the member states.

The make the long complicated story short, the essence is:

1. The European Stability Mechanism will be transformed into the EMF
2. The EU Commission wants to strenghten the Economic and Monetary Union

"We don't want to deal with IMF anymore, we disagree with and can not control it, so we will create our own European IMF. We will be able to impose whatever we want to any country very easily. Yeaaah" https://t.co/6W2HcPIKqk

I would also add that with the creation of a European Fund, the Commission and all Europeans admit that the rigid IMF-Greece-Experiment has completely failed.

Do you believe that it will make a difference that the Europeans of the EU Funds are politicians and no technocrats?