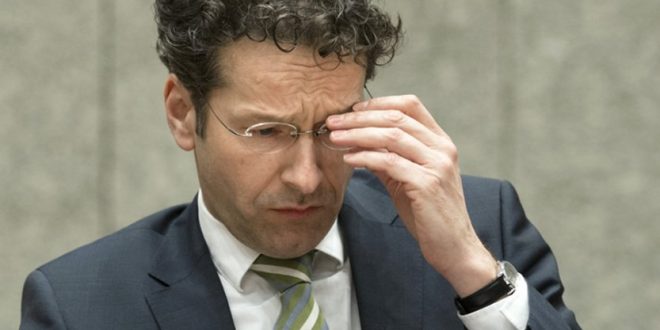 The main aim especially of the first Greek bailout was to rescue investors outside Greece, outgoing Eurogroup chief Jeroen Dijsselbloem admitted  in the European Parliament on Thursday. Odd. Less than a month ago, Dijsselbloem said that the bailout was used to save the banks.

“There were mistakes in the first programmes, we improvised. The way we dealt with the banks was expensive and ineffective. It is true that our aim was to rescue investors outside Greece and for this reason I support the rules for bail-ins, so that investors aren’t rescued with tax-payers’ money,” said Jeroen Dijsselblem in reply to independent Greek MEP Notis Marias.

Dijsselbloem noted that it had been a huge crisis because the fiscal sector had faced the risk of a total collapse that would have left many countries with a high debt.

However, he pointed out that banks had only needed 4.5 billion euros in the third programme because the private sector had a huge participation.

Referring to the non-performing loans, he said that a private solution that did not  once again place the burden on tax-payers was near. He also pointed to measures being taken in Greece for the protection of the socially weaker groups, to make sure that they were not the victims of the auctions.

Referring to the early payment of the IMF loans with the remaining money of the programme, the Eurogroup chief said that this made sense financially, given that the IMF’s loans were more expensive than those of the Europeans. However, from a political point of view, the Eurogroup prefers that the IMF remain fully involved in the Greek programme, with its own responsibilities, he added. In any case, he noted that the final decisions on debt relief will be made later, when the programme is concluded and the sustainability of the Greek debt has been examined.

PS I am sure that a month later Dijsselbloem will finally admit the whole truth and that is that the first Greek bailouts were to save the German and the French banks. But by so many lies and secrets ever since he was installed in the Eurogroup as president in Jan 2013, he might not be in position to distinguish reality from a fake narrative. Given the fact that he became Netherland’s finance minister in Nov 2012 and the first bailout was in summer 2010, there is a slight possibility that he has no idea what he is talking about.