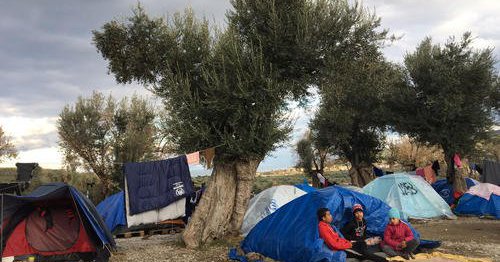 Greek Migration Minister, Yannis Mouzalas, has admitted that migrants in the Moria Camp on the island of Lesvos may die of cold in the upcoming winter. In an interview to German magazine Der Spiegel, Mouzalas said that he cannot rule out migrants’ death because of hypothermia.

He said that authorities were making preparations to ensure that the s-called hot spots on Lesvos and other islands in the Eastern Aegean were ready to deal with plunging temperatures.

“We are already sending more material and food to the Moria camp,” Mouzalas told Der Spiegel, adding that the key were the new arrivals.

“If there is no large increase of new arrivals, then we are well prepared,” he stressed saying that “everything will be in place by December 15th.”

Mouzalas added that authorities may reserve some rooms in hotels in order to meet upcoming needs.

Greece continues efforts to provide relief to the islands and plans to move more refugees and migrants from the islands of Lesvos, Chios and Samos to the mainland.

A total of 1,000 vulnerable people of various nationalities are scheduled to be transferred to the mainland on Saturday.

According to latest information, by Wednesday there were: 8,322 refugees and migrants on Lesvos, 2,704 on Chios and 2,289 on Samos.

The EU -Turkey deal of 2016, prohibits the transfer of new arrivals to mainland.

Summer tents for refugees and migrants to spend the winter months in rain and low temperatures.