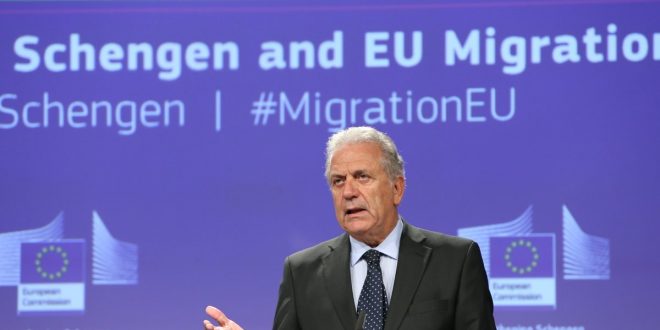 The European Commission has described as “unacceptable” plans by Donald Tusk, the European Council president, to scrap mandatory quotas on relocating asylum seekers across the EU.

Speaking in Strasbourg on Tuesday, EU migration commissioner Dimitris Avramopoulos, said a note put forward by Tusk ahead of an EU summit is anti-European.

“It denies, it ignores, all the work that we have done during the past three years,” said Avramopoulos.

Avramopoulos said the Tusk paper also undermines “one of the main pillars of the European project, the principal of solidarity”.

He said “solidarity cannot be cherry picked” and that Europe has a moral and legal duty to protect refugees.

The unusually frank comments come ahead of discussions on migration on Thursday among EU leaders at a summit in Brussels.

Tusk in a paper tells the leaders that the mandatory quotas, as proposed by the commission under broader asylum reforms, are both “highly divisive” and “turned out to be ineffective.”

Tusk made similar comments in October when he announced that obligatory quotas have “no future” given the outright defiance from the so-called Visegrad group of countries composed of the Czech Republic, Hungary, Poland, and Slovakia.

The issue of mandatory quotas, which the commission views as a key component of an EU-wide solidarity reform known as Dublin, has so far failed to reach any consensus among bickering member states.

Hungary, the Czech Republic and Slovakia had voted against the relocation mechanism in 2015 but were required to take in people anyway. The issue was viewed in the respective states through a prism of sovereignty and security.

“Tusk believes that things as they stand now, it is difficult now to find a consensus based on the mandatory quota,” a senior EU official told reporters in Brussels on Tuesday.

Italy and Greece are leading EU states that are at odds with the Visegrad group, and are pushing for greater commitments to ease pressure of migratory flows, given that most people enter either Italy or Greece first before heading further north in Europe. (full story euobserver)