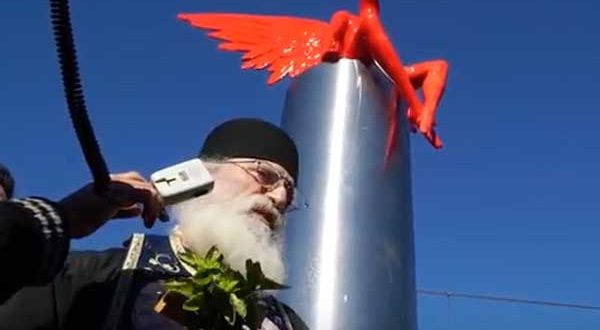 Holding flags from the times of Byzantium, showing the glory of Greek Orthodoxy, icons of saints and singing hymns, the priest and members of the parish of Panagia Myrtithiotissa church in Palaio Faliro marched to Trokadero on New Year’s Eve.

There, they sang the dismissal hymn for Saint Georg and sprayed holy water at the statue in order to drive out the supposed evil spirit from the area.

The priest had earlier sent a letter to the mayor of Palaio Faliro demanding the removal of the statue which he described as “the satan’s soldier.” Furthermore he claimed that the piece of art insults the christian faith.

The statue artist Kostas Georgiou calls “Phylax” was installed beginning of December in the area, a donation by a shipowner family to the municipality of Palaio Faliro, a guardian over the city, as the name Phylax indicates.

The red statue that resembles the ‘fallen angel’ stirred the religious sentiment of some parts of the local society. Days after the installation, unknown perpetrators vandalized the statue by throwing white paint.