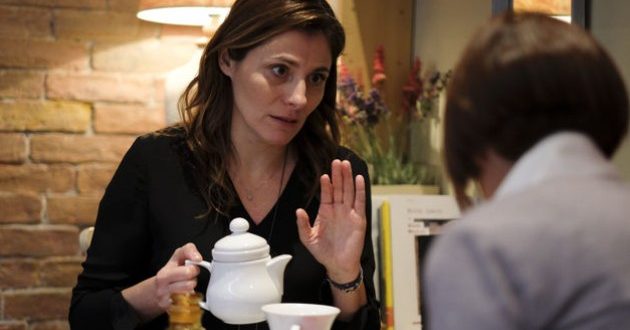 Partner of Greece’s Prime Minister Alexis Tsipras and mother of his two children, Peristera (Betty) Baziana gave her first ever interview to a Greek media, daily Efimerida ton Syntakton. The fact that the partner of a serving Greek prime minister gave an interview and some of her statements triggered a political fracas, one of Greek politicians’ favorite hobby who love to waste their time and their brain cells in non-issues when there are really important issues to solve.

As expected, Betty Baziana defended her  long time partner and his policies.

Referring to the negotiations between Greece and lenders in the first half of 2015said that he  “never lied, never backed down…but fought to face a harsh, unbending situation that emerged before him in an extremely threatening manner.”

Talking about the referendum on the same year and practically ended in a new bailout in August 2015, Betty Baziana said “I cry from anger every July 5th.”

She told the daily that “Tsipras, having asked the Greek people in the referendum, departed (for Brussels) to again negotiate with creditors, for a better agreement. He had with him a clear mandate for a fairer agreement, not a mandate for a clash or exit from Europe and the euro (zone). The question in the referendum was clear: ‘Do you agree with the proposal by the creditors?’ Propped up with the crystal clear ‘no’ by the Greek people, he returned with an agreement that was far removed from what he originally envisioned.”

She added that “…He made a compromise, not a humiliating one, however, but a compromise that he believed had a prospect: to finally lead to an end of the rule of the powerful (in Europe); an end to unreasonable austerity.”

43-year-old Betty Baziana is Dr.-Ing. in Electrical and Computer Engineering, a  former school teacher now transferred to a university-level position. she is registered partner of Alexis Tsipras with whom she has two sons.

Reactions to her interview published on Friday were fast and furious. Opposition parties and their affiliated media as well as social media users criticized Baziana for the interview with lots of ironic comments.

Main opposition conservative New Democracy spokeswoman, Sofia Zacharaki, among others, stated it was “too late for tears.” She added that the interview was deeply “offensive for Greek citizens, which were fooled by SYRIZA.”

A quip on social media by former Parliament Speaker Zoe Konstantopoulou, who bolted from SYRIZA for an independent political course after the third memorandum was signed and approved by a Parliament majority, was even more scathing.

“Today (Saturday) they brought forth a previously uncompromising leftist to speak … the one who would separate from Tsipras if he signed a bailout,” was Konstantopoulou’s reaction.