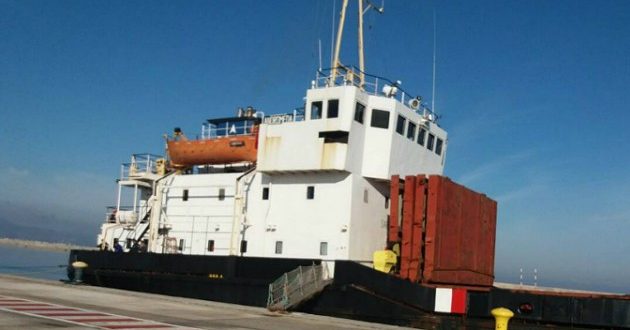 Greek authorities are seeking the safest option for the transport and storage of 410 tons of explosives seized from vessel “Andromeda”, described as a “moving time bomb.” In Irakleio, Crete, where the vessel has been impounded, locals are concerned about the presence of some many explosives and thus outside a military camp.

While a development on the issue is expected in the next 24 hours, the explosives are safeguarded under the strict control of the Greek Coast Guard and private security guards in the port of Herakleio, Crete.

On Thursday, the regional governor of Crete, Stavros Arnaoutakis, appealed for the immediate removal of the explosives from the area. Their presence has caused a growing concern among residents and local institutions.

Freighter Andromeda was found carrying 29 containers of explosives and detonators as well as 11 empty gas tanks allegedly destined to Libya. Authorities describe the vessel as a “moving time bomb.”

The Tanzanian-flagged freighter was stopped by the Greek Coast Guard while it was sailing south of Crete after receiving a tip. Andromeda was impounded at the port of Heraklio.

“The coast guard neutralized a moving time bomb that could have had unpredictable consequences both for people and for the marine environment,” Rear Admiral Yiannis Argyriou was quoted by Greek media.

Additional inspection on the general cargo vessel by local Maritime Inspectors has reportedly showed 102 serious remarks/ deficiencies with regard to its sailing worthiness, thus endangering the safety of the ship, the crew and the cargo.

An international ban prohibits weapons shipments to Libya, where there is a civil war and multiple armed groups operate.

The ship’s captain was later instructed by its owner to deliver the explosives to the Libyan port city of Misrata, the coast guard said.

The chief captain of Andromeda said that the two Turkish companies that owned the load did not pay the fees (175,000 USD)  for the passage through the Suez Canal and head to Djibouti and Oman. Unpaid was the total amount of 400,000 USD. In a letter to Cretapost.gr, Theodoros Rellos manager of Andromeda Shipmanagement SA said that the company fell victim to a maritime fraud.

The freighter was sailing for two months in the area and took anchorage in several ports in Port Said, Lemessos, Larnaka, Kaloi Limenes, Kalamata and Siteia.

The crew of five Indians, two Ukrainians and an Albanian were arrested. They were to be brought to prosecutor on Thursday.

Rellos said that was nothing illegal and that the crew should be released.

According to daily Efimerida Ton Syntakton, the shipping company has its office sin Menidi, west Attica.

The explosives are to be transferred to some military camp with the aid of the Greek Army, some media reported on Thursday.