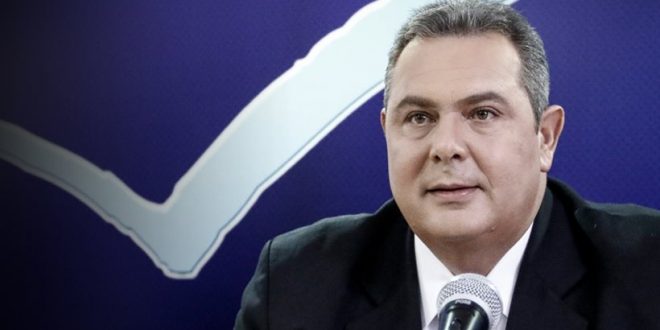 Kammenos calls for a Referendum on Macedonia name dispute

Leader of conservative right-wing Independent Greeks (ANEL) and Tsipras’ junior coalition partner Panos Kammenos calls for a referendum on Macedonia name dispute while the government is holding negotiations with the Former Yugoslav Republic of Macedonia (FYROM).

In an op-ed article publish on newspaper Kyriakatirki Dimokratia, Kammenos said “the Greek people will have to decide on the unprecedented decision in the history of man to cede their history and civilization to another people.”

“Including the term Macedonia into the new name [of FYROM] would signal the retrenchment of Greek civilization in the centuries to come.”

The ANEL leader who is also Defense Minister said recently that he will never accept the term “Macedonia” a component in FYROM’s new name and proposed “Vardarska.”

There cannot be  “neither Upper Macedonia nor Nova Macedonia, there is also Vardarska” Kammenos has said with reference to the southern region and province Vardar Banovina of the Kingdom of Serbia and the Kingdom of Yugoslavia 1929-1941. The territory roughly corresponds to today’s FYROM.

So far there has been no reaction by the SYRIZA part of the coalition on Kammenos’ referendum proposal.

It was just Foreign Minister Nikos Kotzias who rejected calls for a referendum on the name last week.

According to a public opinion poll conducted by Sunday newspaper Proto Thema, 68% of Greeks says NO that the name Macedonia is component of FYROM’s new name.

Meanwhile in Northern Greece, several local organizations are preparing for a Macedonia rally in order to raise their voice against inclusion of the term into FYROM’s new name. “The use of Macedonia by FYROM is non-negotiable,” organizers say, adding that this would “constitute a distortion of history” and would “be against the will of Greek people.”The rally is supp00orted by many local clubs, Christian associations, mayors and some clergy although the official Church of Greece has distanced itself from any rally on the issue.

The rally is scheduled for Sunday noon, January 21st 2018, in front of the White Tower in Thessaloniki, the capital of Macedonia.

And you? What do you think?