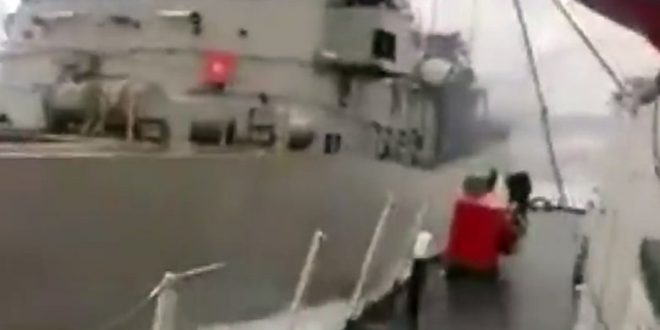 Turkish Coast Guard released a video showing the incident between a Turkish patrol boat and gunboat “Nikiforos” of the Greek Navy on Wednesday. Turkish disinformation at its best: Some media says the two vessel collide, some that the Greek gunboat harassed the Turkish patrol boat.

The footage filmed by a member on board of the Turkish boat shows clearly the criminal approach on the left side of Nikiforos and the Turkish captain’s intention to trigger an incident in the Aegean Sea. It also saws how the Turkish sailors defy all international rules of safe sailing.

English version of Turkish daily Hurriyet to which the TCG submitted the video speaks of a collision.

Greek gunboat Nikiforos was on a routine patrol in the area, the Turkish boat violated the Greek territorial waters.

The islet of Imia tops the Turkish list of islets and islands Ankara claims they belong to Turkey.