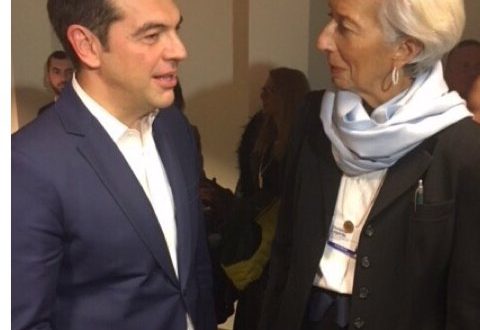 Greke media write that through Tsipras’ “bilateral contacts, the key targets were reaffirmed: completing the debate on the Greek debt settlement and defining the last steps before the country exits the markets.”

What it seems clear is that Lagarde reiterated the IMF’s position on debt relief, and Moscovici just saw the next review of the Greek program.

I met with Greek PM Tsipras @tsipras_eu and congratulated him on progress in #Greece’s economic reforms. We agreed to work together toward the shared goals of completing reforms and securing debt relief from Greece’s European partners, which are essential for sustainable growth. pic.twitter.com/LLK8hGCXpB

“It was a pleasure to meet with Prime Minister Tsipras in Davos today. I congratulated him on the progress Greece has achieved, a sentiment that was also reflected in the recent Eurogroup statement, and assured the Prime Minister of the Fund’s continued support for Greece’s adjustment program. I also underscored that the completion of the reform agenda and provision of debt relief by Greece’s European partners are essential to support sustainable growth and a successful exit from official financing later this year. The Prime Minister and I agreed to work together toward these shared goals.”

Enthusiastic about the Greek progress was also Pierre Moscovici. He tweeted:

Meeting with @tsipras_eu after the successful conclusion of the third review. We are preparing the conclusion of the programme in summer 2018, so that #Greece can become a “normal” country in the #eurozone with a strong strategy for growth and employment pic.twitter.com/n6Hv1paM7B

The Greek Prime Minister commented mor in the meeting with the EU Commissioner and merely posted a picture with Lagarde.

Meeting with European Commissioner for Economic and Financial Affairs, Pierre Moscovici, on the sidelines of the World Economic Forum. The completion of the third evaluation and bond yeilds, reflect the new era that the Greek economy has entered. #WEF18 pic.twitter.com/r2ddB0plBg

Greece is entering a new phase of confidence and credibility, and everyone must now work together for the successful completion of the bailout programme in August, government sources said of the meeting on Thursday between Prime Minister Alexis Tsipras and EU Commissioner for Economic and Financial Affairs Pierre Moscovici on the sidelines of the World Economic Forum in Davos, Switzerland.
Sources said the main goal now for Greece is to return to the EU’s “European semester” process by spring this year – the routine review of a country’s national budgetary and reform policies every six months at EU level, which includes additional obligations for countries under an adjustment programme.

They added that the government’s goals include the completion of talks on the adjustment of the Greek debt, the strategy leading to the country’s return to international markets, and work on Greece’s national growth and development strategy.

PS I suppose, the two congratulated also Tsipras for his 3rd anniversary in power and praised him for being a loyal follower of the styrict austerity program. I have no idea whether he got a glimpse of his left-wing past and reminded them that “reforms” mean nothing else but “income cuts” and “taxes, taxes, taxes”