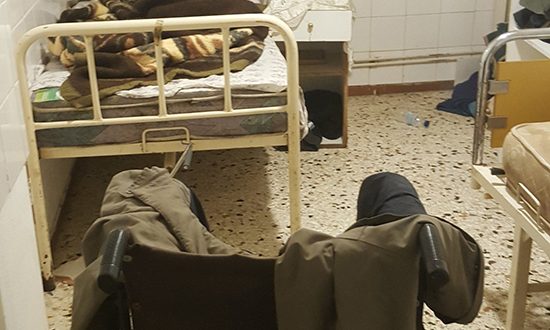 Athens: Elderly in facility unit left without food and heating

The owner of a facility for seniors abandoned fourteen elderly and left them without food, heating and cleaning service. Authorities organized a big operation to free the elderly from the wretched living conditions and relocate them to proper public facilities for elderly. The care center was operating illegally. It has been sealed.

The nursing home “The Third Age” was located in Agia Paraskevi suburb of North Athens and was operating illegally.

According to a statement issued by the Regional government of Attica, the operation was staged on Friday after the building owner unsuccessfully tried to evict the owner of the seniors’ care unit.

Sanitary services for once more time inspected the miserable conditions, the prosecutor got involved. He brought chargers against the owner for exposure the lives of elderly at risk.

The owner has reportedly disappeared living the 14 elderly without heating, food and any cleaning service for several days.

A representative of the Regional Government in Attica said that “the torture of 14 elderly whose weakness was taken advantage by the owner has come to an end.”

Authorities had already fined the unit owner with fines exceeding 150,000 euros for not implementing the required regulations.

Such facilities operating without proper license normally charge around 500 to 600 euros per elderly per month.

If authorities has fined the facility it means they knew of its existence. Why did they let it happen for so long?