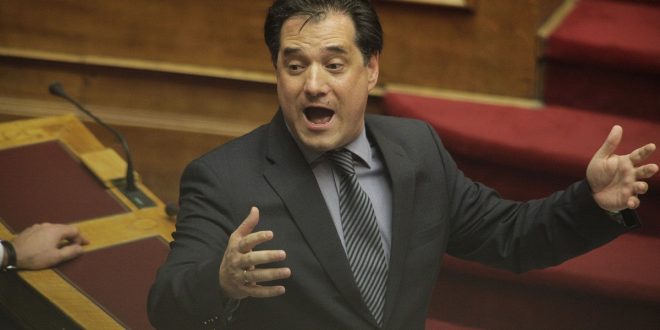 Novartis: Ex health Minister says “They should hang me at Syntagma, if…”

February 12, 2018 Greece, Politics Comments Off on Novartis: Ex health Minister says “They should hang me at Syntagma, if…” 291 Views

Former Health Minister and now Vice president of conservative New Democracy, Adonis Georgiadis has said “they should hang me at Syntagma” if they find kickbacks from Novartis. For one more time, the ND-Vice whose name is involved in the Novartis case file sent to Palriament, was trying to prove he had not involvement in the scandal while he was a Health Minister 2013-2014.

“If they find accounts of mine in Switzerland, they should hang me at Syngagma,” Georgiadis said adding “and because this will not happen all these are about to find themselves in the court rooms.”

The interview took place after Sunday newspaper Estia had claimed that authorities have located “the secret bank account of a former minister with several millions euros, the account was in a Swiss bank.”

Of course, Georgiadis’ readiness to put his head into a noose and suffer a brutal death is pure rhetorical. First, because the death penalty has been abolished in Greece several decades ago.  Αnd secondly, because the loquacious politician had also once promised to leave the country “should SYRIZA win the elections.” SYRIZΑ won twice, Georgiadis is still in the country.

Βeing furious about the involvement of his name in the case file, the conservative Vice has been spending hours speaking – or better say: screaming – to the Greek media trying to convince the public opinion that he has no involvement whatsoever. Ever since last Tuesday, when the case file was submitted to the Palriament and the Speaker read the names of 8 ministers and 2 prime ministers allegedly involved, Georgiadis statements on the issue have been bombarding the ears and the eyes of the Greeks non-stop.

In his effort to show that he is a poor Greek politician, he invited television cameras in his home and had them film the evidence of his innocence: humidity in the corners and the walls of his home, cracks on the doors and other signs of the time.

The main idea for this report was Georgiadis’ counter-attack, a solid proof  evidence, to one witness’ testimony who had claimed that the ND Vice had received some 70,000 euros in order to renovate his home.

Georgiadis has repeatedly threatened to file lawsuits against the witnesses, the Prime Minister and everyone behind this “plot” – as New Democracy describes the Novartis bribery files. However, he has not made his threats come true, so far.