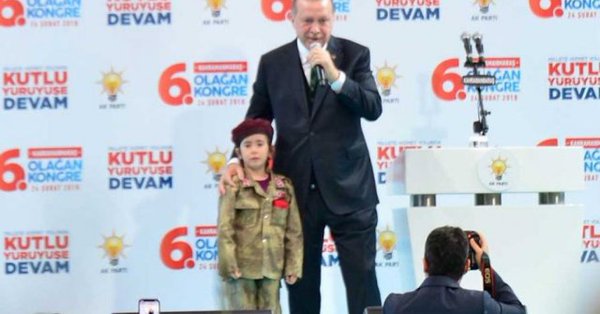 War-mongering Turkish President Recep Tayyip Erdogan a little girl in army unifrom “the Turkish Flag on her coffin” if she martyred in Afrin, Syria. Talking about “reservists’ mobilization” he set thousands of  Turks in panic. At the same time, he lashed out against the US

Erdogan put a little girl under immense psychological pressure in front of thousands of his cheering supporters and abused the child promising her a … honorable death! He told the sobbing girl that the Turkish flag will decorate her coffin if she will be a martyr for the country.

During his speech at the AKP party convention in Kahramanmaras province on Saturday, he invited a little girl dressed in military uniform on stage.

The poor creature has already started to cry before she goes on the podium. She wear a dark red beret, symbol of the special forces “bordo bereli”, the so-called “killing-machines of the Turkish Army.”

Erdogan  tells her: “But our soldiers don’t cry. When they become martyrs they are covered with the flag. We are ready for everything aren’t we?”

The 5- or 6-year-old girl stands scared in front of the Turkish dictator who tells the crowd “Mashallah (God has willed), she has the Turkish flag is in her pocket.  If she becomes a martyr, inshallah (Good willing), they will lay the flag on her coffin.”

The crowd cheers chanting “Chief! Take us to Afrin!”

With ninety percent of Turks supporting the Turkish military operation against the Kurdish-controlled Afrin region in Syria, Erdogan has been using a more and more nationalistic tone in his rallies.

Like other Middle-East dictators before him, he misuses children in support of Afrin “Olive Branch Operation” propaganda and it was just last week that several children in military uniform saluted the Turkish President during a speech in the parliament.

The Turkish president did not scare only the little girl. He talked about mobilization of reservists and called on people to check on call-up orders for the military. He said he was ready to march with his people when the time comes.

“We are on the eve of a new resistance. We will have a hot summer. After the meetings we are conducting with the military leadership, and if the people are called to mobilization, it will be first me and then the nation who will match together to the front” Erdogan said.

His announcement set thousands of Turks in panic who rushed to check on e-government websites whether call-up orders for reservists have been issued. All websites of Turkish e-government incl the one of Defense Ministry went down.

Turkey against Us and Europe

He lashed out at the US and allies and spoke of a “global anti-Turkey propaganda based on lies and fake news.” Supporters of terrorists post fake pictures on social media in attempt to defame Operation Olive Branch, he said.

“Launching a worldwide war of propaganda, based on lies, slander and distortion, by those who cannot deal with Turkey on the ground will not work,” the choleric president shouted. and continued:

“They want to sever us from our sisters and brothers by forming a terror corridor along our borders [with Syria]. They do not hesitate to link arms with terrorist organizations. They are not aware of the fact that we will break the arms and wings of the [terrorist] structure they have been striving to form and destroy it completely. We believe we will sooner or later bring down the terrorist organizations and those who are behind them.”

“You, immoral, unscrupulous, shameless [Americans & others] It is in your blood to kill civilians, not in Turks. You have done so in Rwanda, Mali, Corsica and Libya and still continue to do so,”

“Our region is once again sought to be sacrificed for certain powers’ fight for profit and interest as it was a century ago. The borders of our region is tried to be redrawn with blood and tear by the imperialists sniffing out oil.”

Being under pressure by the US  on Syria and by Europeans on Greece and Cyprus, Ankara’s top politicians in mass hysteria are firing ‘warning salvos’ at all directions.

Turkish Foreign Minister Mevlut Cavusoglu warned European states to stop messing around Turkey. “There will be no security and stability in Europe without Turkey,” he said.

He said that his government would consider countries, entities and people that support Kurds in Syria as “terrorists.”

Turkey must be feeling terribly alone for the time being.

Meanwhile, the Dutch Parliament recognized the 1915 massacres of Armenians as “genocide”.

“The decision is nonbinding; it is a reflection of hostility against Islam,” Cavusoglu said.