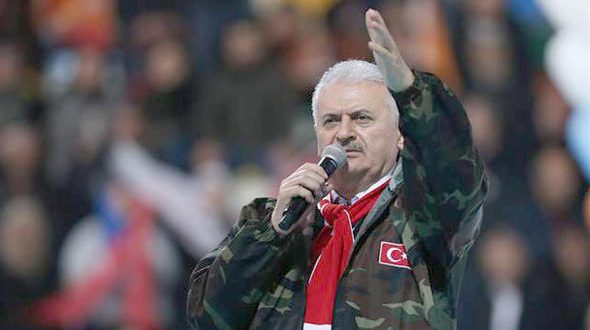 “Nobody should make wrong calculation in the Aegean and the Mediterranean,” Turkish Pprimin minister Binali Yildirim said and convinced he had warned enough Greece and Cyprus. “Turkey’s naval forces have  the power to eliminate any kind of threat in the Aegean and the Mediterranean under any condition and circumstance,” Yildirim said on Sunday, launching anew direct threats against the two neighboring countries.

“While Turkey is fighting terrorism in domestic and international level, some want to benefit from the situation and device various plans and traps in the Aegean and the Mediterranean,” the Turkish prime minister said during the inauguration of a new submarine in the Gölcük Naval Shipyard Command in Marmara.

Let me be clear. Whatever the situation maybe. Turkey and its Navy have the ability to neutralize any kind of threat. Let no one be mistaken in their evaluations,” he said.

In order to underline the war readiness of Turkey, Yildirim appeared dressed in a military uniform.

Turkey is currently in a war-mongering frenzy, a day earlier president Erdogan promised a little girl in army uniform a honorable death with the Turkish flag on her coffin if she becomes a martyr for Turkey in Afrin, Syria.

While Ankara beats the war drums at any direction, some Turkish media commented on Yildirim’s threats, it is the final warning to Greeks.

Ankara has raised a significantly aggressive tone at Greece and Cyprus, and went so far to ram a Greek patrol boat off the islet of Imia to claim sovereignty rights in the Aegean Sea. Naval warships blocked Italian ENI drill ship from concocting energy research in the East Mediterranean Sea.

Sunday morning, Deputy National Defense Minister Dimitris Vitsas told private Skai TV that Greece is “very strong in military terms and with its upgraded international role” and warned Ankara that “anybody tries a fight in the Aegean must think twice and thrice.”

PS Is Turkey really up to armed conflicts with Greece and Turkey? Taking into consideration that its Land and Air forces operate in Afrin, the hawks in Ankara may be thinking that also the Navy should do something for the money it spends every year. #just-a-suggestion