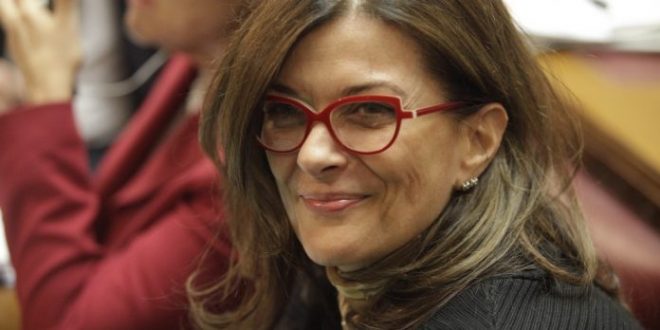 Alternate Labor Minister Rania Antonopoulou is in the middle of a scandal as she has been receiving a rental allowance of 12,000 euros per year. The allowance has been approved in September 2015, ever since she was appointed Minister in the Greek government.

This is a normal procedure if the members of the cabinet have their main residence outside Greek capital Athens.

If there wasn’t this tiny little problem.

Rania Antonopoulou and her husband, Dimitris Papadimitriou, also a Minister for Economy, are considered to be the wealthiest couple of the Greek government.

According to Greek media, the couple Antonopoulou-Papadimitriou owns

Rania Antonopoulou is making use of the provision that ministers who are not elected members of the Parliament and non-residents of Athens are eligible to rental allowance. Media report that Antonopoulou has declared she was a New York resident and had applied for the allowance.

The couple is reportedly renting an apartment in noble district of Kolonaki, close to the Parliament.

Rental allowances are given to MPs from the countryside as wells as to Ministers without taking into consideration “income criteria” something which is valid for every single euro the Greek state distributes to poor households and vulnerable groups of the society in form of welfare allowances or the so-called extra help of “social dividend.”

The revelations by daily Eleftheros Typos last Friday has triggered an outrage not only among the political opposition and the society but also among government MPs, coalition partners officials, SYRIZA officials included.

“If things are as reported then there is an issue,” SYRIZa MP Spyros Lappas told Thema FM. He revealed that “a minister who is also member of the Palriament earns 4,200 euros plus a ministerial allowance/bonus, but a minister who is not MP earns 2,000-2,100 euros.”

Dimitris Kammenos, MP from Tsipras’ coalition government partner Independent Greek, said “it is clear there is an issue here, the issue is not just a matter of income but also of principle.”

On Twitter, Greek internet users lashed out at the minister, saying she should be ashamed and resign as soon as possible.

Many mentioned the 400-euro allowance cut for the only resident of  the remote islet of Kinaros in the eastern Aegean Sea, near the islets of Imia and the island of Kalymnos. Authorities have not paid the allowance for the pasturage Rinio Katsotourhi two years ago, they cut it beginning of the year and furthermore they ask her to pay a rent. The allowance was cut due to a mistake her son wrote in his tax declaration. The rent has been demanded as the pasturage belongs to local authorities.

Despite the outcry over the weekend, there was no official statement by the government or at least SYRIZA on the issue.

Monday morning, Prime Minister Alexis Tsipras had a conversation with Antonopoulou, a statement of hers is due.

“The prime minister spoke with Mrs Antonopoulou, expressed his disagreement with the fact that she made use of the rental provision,” government spokesman Dimitris Tzanakopoulos said speaking to Real FM on Monday morning.

According to the majority of  Greek media Monday noon, Antonopoulou’s resignation is imminent.

It should be noted that Rania Antonopoulou is not a member of the Greek Palriament, that is she is not elected MP, but just an appointed minister.

In a statement issued Monday noon, Rania Antonopoulou said she would leave it up to the Prime Minister to decide about her future as part of the government. She said that she will return the money, 23,000 euros in total, she had received so far, noting that she did not renew her application after August 2017.  She wrote further that it was not illegal to receive the allowance and that joining the government was not aiming to become richer. “I initiate procedures to return the money,” she stressed.

PS If  Tsipras and SYRIZA wants to have the “moral advantage of the Left” as SYRIZA has been claiming for the very beginning it came to power and in contrast to the “corrupted politicians of previous governments”, Rania Antonopoulou must only only resign “yesterday” but also return the money she received or donate them to poor and vulnerable Greeks.