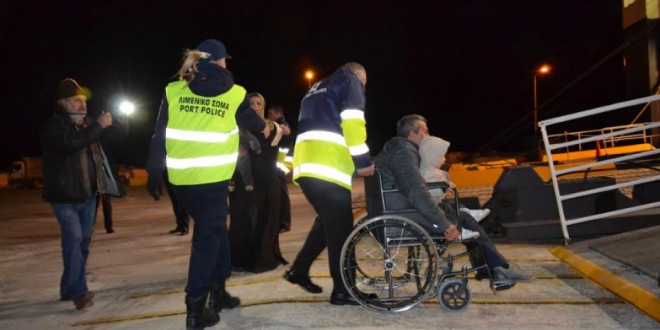 The geographical restriction imposed on refugees and migrants who arrived in Greece after the EU-Turkey Statement on the islands of the northern Aegean, violates the principle of human dignity, the alleged need to apply it is not substantiated, representatives of the Bar Associations in Chios, Lesvos, Rhodes, Kos and Samos, as well as the Greek Council for Refugees (GCR) said in a joint press conference on Tuesday.

The five Bar Associations and the GCR have submitted two cancellation requests against the State and the Asylum Service’s decision to keep refugees and migrants on the islands until their asylum requests have been examined, which were heard earlier today by the Council of State. It is not known when the court will issue its ruling.

Hara Katsigianni, from GCR’s legal department, said the specific decision violates the European Directive 33/2013, according to which such geographical restrictions should be imposed on grounds of public interest, public order or for the rapid processing and effective monitoring of the application for international protection. However, she explained, “the provision of Article 41 of Law No 4375/2016, on the basis of which the decision on a geographical restriction was adopted, does not specify any reason of public interest or public order and does not mention the speedy monitoring of the application”.

Grammatiki Alimonou, representing the Bar Associations of Chios, Rhodes, Kos and Samos, stressed that “as far as the obligation to remain on the islands is concerned, there is no clear condition in the EU-Turkey Joint Statement”. On the contrary, she explained, the EU or the migration policy ministry interprets the statement in a way that requires refugees and migrants to remain on the islands until it is decided if they qualify for asylum and return them to Turkey from there.

“We are here to defend our islands, to defend the rights of refugees and migrants, who cannot live in appalling conditions, but to support the right of island residents to exist, to live, to create without deteriorating their daily lives,” the president of Chios’ Bar Association, Anthippi Zannara said.  [amna.gr]