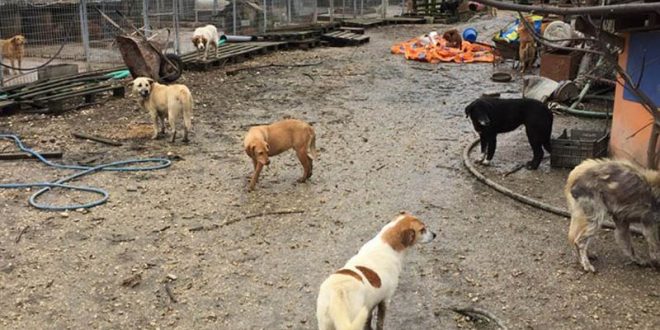 Preveza: 350 dogs in municipality shelter at risk of starvation

March 1, 2018 animals Comments Off on Preveza: 350 dogs in municipality shelter at risk of starvation 928 Views

350 dogs at the municipality shelter of Preveza are at risk of starvation, local animal welfare organizations have denounced. “The dog food has not be supplied in time, the dogs are at risk to starve, volunteers have nothing to feed the dogs with,” local organization “Intervention for the animals – Preveza” said over the weekend.

Noting that they made a plea in social media to collect food donations for the animals, the animal welfare organization said that half tone of dog food was bought stressing at the same time “the survival of 350 dogs cannot depend solely on the charity of animal lovers.”

The organization noted further that there was no storage room in the shelter with the effect that mice raid the food.

“It is not the first time that there is no food for the animals,” the organization said.

On its part the deputy mayor in charge of the animals defended the municipality speaking of  “mismanagement”, claiming also bureaucratic hurdles.

“The food supply was calculated to last until the end of March. What happened? Mistakes? Eaten by mice?” he said and blamed the volunteers for not informing in time the shortage of food. “They can’t come Friday noon and ask for food,” he said adding that the municipality was not able to sign the relevant contract for the food supply in short time.

He added “some private animal lovers have taken care of the issue.”

The animal welfare kept attacking at the municipality saying that the animals live in dramatic conditions, without adequate protection from cold in winter and heat in summer.

“We have repeatedly pointed out to municipality the urgency of improving the shelter, especially with regards to sewerage, cleaning inside and outside the shelter, the deplorable condition of the container that we use as an office-vet’s practice, that the doors and and roofs of animal kennels need urgent repairs,” the Preveza welfare said in one of its statements.

The problem with many municipality shelters in Greece is that local authorities accept their creation after pressure of local animal welfare societies, however they do it only half-hearted.

They do not really care about the thousands of strays that are born and thrown away because mostly the locals do not sterilize their pets.

And then the minister of agriculture wants to hand over full power over the strays to municipalities. A joke. A bad Greek joke.