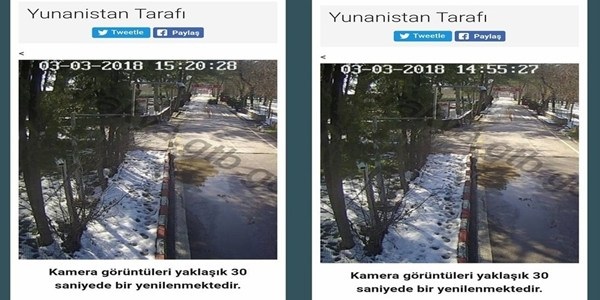 Residents in the broader area of Evros are boycotting shopping in Turkey demanding the release of the two Greek soldiers arrested last Thursday. This has triggered a big disappointment  among shopkeepers on the other side of the borders as thousands of Greeks move every weekend to Turkey for shopping and other services.

The call to boycott was initiated by the president of  the “Agriculture Breeders Party”, Vakis Tsiobanidis. “No Greek in Turkey until our soldiers are released. Economic boycott,” he posted on Facebook and the call spread like wild fire.

The post received hundreds of Shares with the effect that just a few people crossed the border on Saturday.

Screen shot from security camera recording the traffic at the border crossing of Kastanies.

Shopkeepers in Edirne (Adrianoupolis in Greek) reportedly complain to local authorities, the local press is talking about an “a abandoned city.” To serve the Greek visitors’ needs, shopping malls, hypermarkets and clinics have been established in Edirne, where thousands of Greeks flock every Friday, Saturday and Sunday due to the low prices.

A court in the city remanded custody for the two Greek soldiers on Friday and they are taken to local prison until their trial on Monday. They accidentally crossed into Turkey on Thursday due to severe weather conditions. Such accidents on both sides are not a rarity and are usually being solved within minutes and without arrests and trials.

Diplomatic talks between the two sides are running high, but it seems that the boycott is for the time being the most effective tool of pressure.