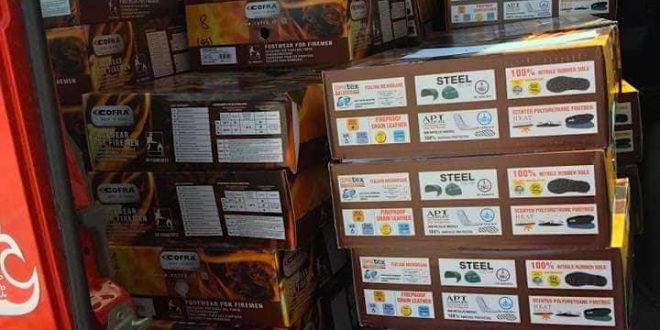 A great gift of appreciation for hardworking fire fighters. Expats, tourists and locals on the island of Zakynthos raised donations and bought 92 pairs of brand new boots which they gave to the local fire department.

Thousands of acres of forest land were burned down last summer, due to a series of wild fires,  that endangered also people’s lives, properties, wild and domestic animals. Fire fighters were working non-stop to take the fires under control.
It was Zakynthos expats and visitors who thought: fire fighters deserve a gift of appreciation. 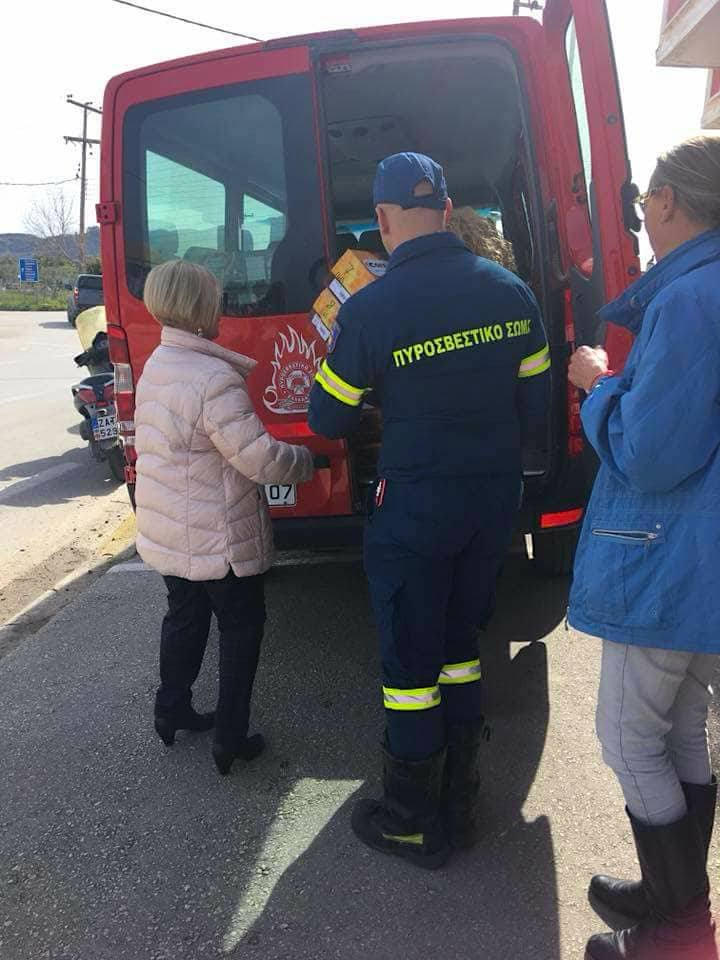 On Friday, 9th March at 11.00a.m, at the local fire department situated in Ambelokipi, Zakynthos, a presentation took place handing over 92 pairs of brand new boots to each member of the Zakynthos fires service, which also includes twelve contracted firemen who have been contracted to Zakynthos on a permanent three years programme.
At the height of the fires last summer 208 special firefighting masks were collected and handed over to the fire department along with donations of water, tea, coffee and sandwiches from both locals and tourists. The campaign to raise the gift of 92 boots for the firemen then took place shortly after in the autumn of 2017.
Speech by Louise Morfis from the Zakynthos Informer:
First of all I would like to thank everyone for coming today.  The British Honorary Vice Consul, Mr Matthew Delapp, Our Prefecture, Mr Niotopoulos, Our Mayor of Zakynthos, Mr Pavlos Kolokotsas, The President of the council, Mr Nick Tsipiras, Ladies and Gentlemen. For those who do not know me my name is Louise Morfis and along with Lesley Paterson, Bobby Gee, Angela Spinou-Smith and Chrissie Parker we run the Social Media site called Zakynthos Informer, which has well over 16 thousand members world wide, I am also an active member of the Volunteer Group of Zakynthos, headed by Dionysios Nikolopoulos, in which I am sure you are aware of some of our activities we have done in the past.
During the summer of 2017 our members took action straight away in helping where we could, at first we offered to our men water, coffee and sandwiches as most could not leave the front, as the days progressed we had more calls from people wanting to help out as the effort of these men to protect our properties, land, home and animals went way beyond their duty.
Visitors to our Island also wanted to show their appreciation and it was then that a lady named Wendy Depuis an ex-pat here on our Island came up with the idea that these men deserve a gift of appreciation and that boots would be the most perfect gift. We then set about promoting her idea and it certainly snow balled from that simple idea.
Our UK family and friends also wanting to help set up a GoFundMe fund which was headed by Dawn Kendrick in England. Without her, these boots would definitely not be here right now. After reaching our goal we then had our friend Rebecca Turner, who unfortunately can not be with us today, set up a meeting with the company Best WorkWear and the Managing Director Mr Ben Turner…. Lesley Paterson was then in charge of the dealings and getting the boots here. She’s done an excellent job wouldn’t you say? I must point out that the company after hearing our efforts have given us two pairs of boots free and the rest of the boots were at cost price, they even paid for the delivery of them to here, in Greece.
These people wanted to be present today to see you all smile, but unfortunately that could not be arranged so they send you this photo with a huge smile to you all. (Present Photo)
Finally, but not at all the least, we have to say a huge thank you to our members of the volunteer group especially Jacqui Kirkby, Tricia Crooks who is away in England at the moment and Gill Dare, these girls along with Lesley and Dawn I called “fire angels”
A special thanks to all of YOU.  Every one of you played an important part whether you feel that your deed was little compared to others, I would like to say, IT WASN’T!!! We all had a goal and we all pulled through, from each and every individual, from businesses pulling together, restaurants, apartments, bars, travel agencies, hotels and the list goes on, from those who were involved in the drop off points around Zakynthos, even Social Media Facebook pages played a role in reaching our target.
Thanks to our Volunteers who worked behind the scenes reaching out where some couldn’t. It took us several months to get this result, today having the boots in front of us ready to hand over to you, you who we regard our heroes of summer 2017. It was an amazing journey and we did it, we got our gifts here and from the bottom of my heart and on behalf of all of us WE THANK YOU!!
The volunteers and the Zakynthos Informer would like to thank everyone for their incredible support. Without them they would have been unable to assist the fire service in such a great and vital cause. 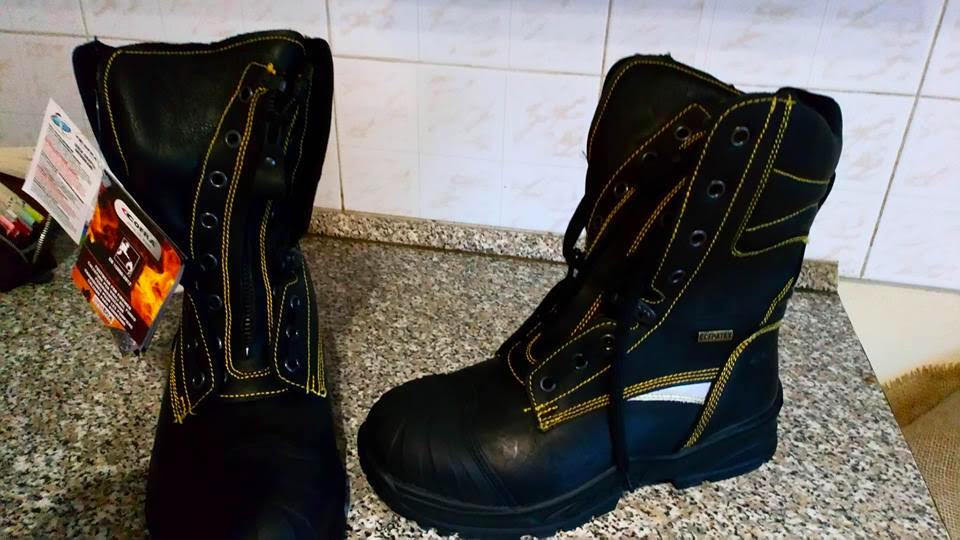 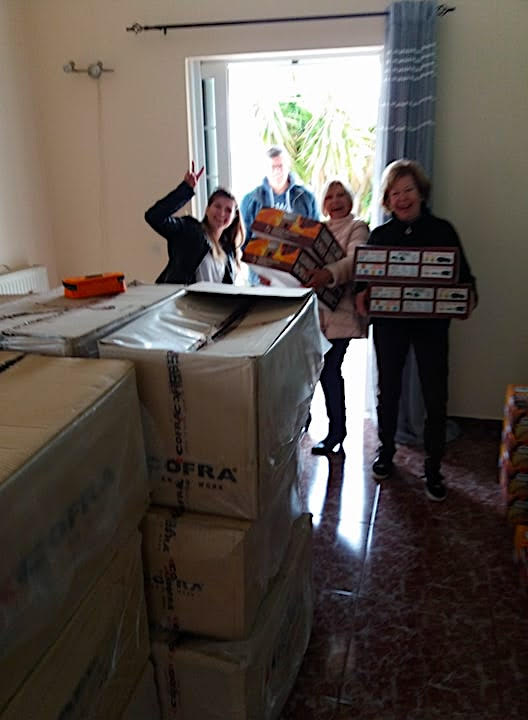 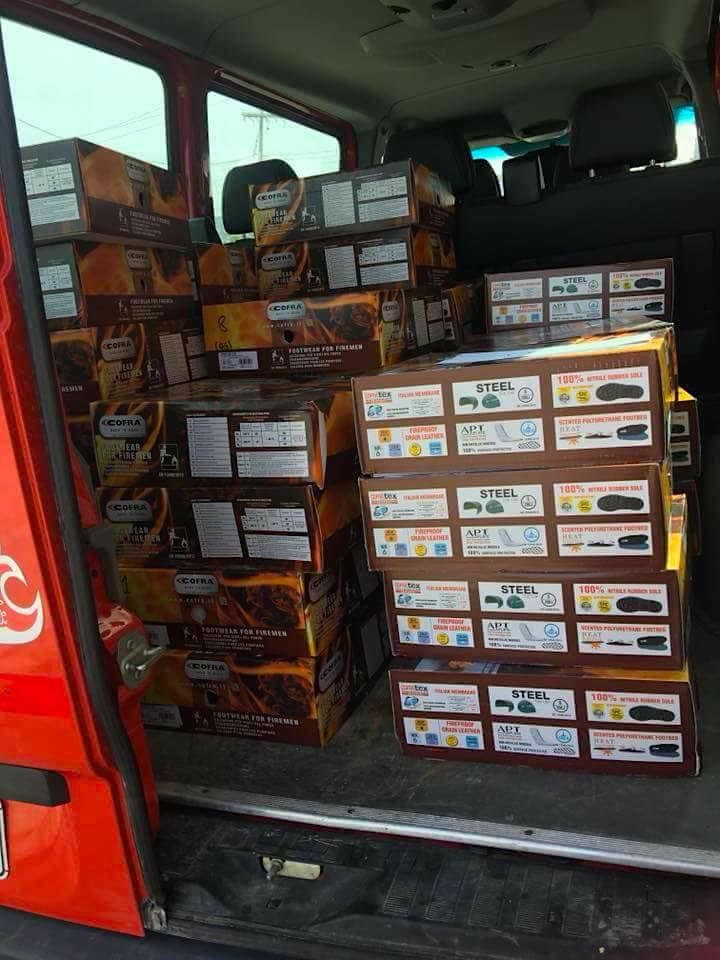