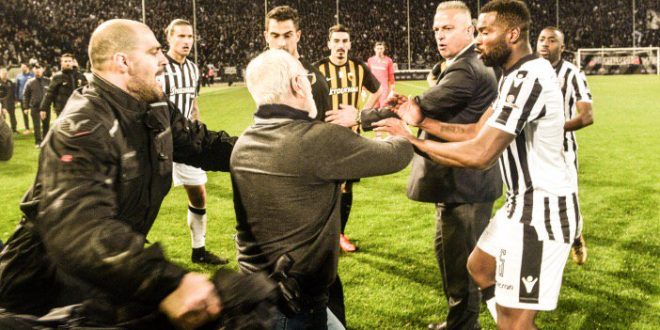 The Greek government decided on Monday to indefinitely suspend the Super League after PAOK FC president Ivan Savvidis entered the pitch armed with a gun on Sunday during a match against AEK FC. Police has issued an arrest warrant for Savvidis and four more persons.

Underlining that Greece is in contact with UEFA, Vasileiadis said “Football Grexit is on the table too.

“In the next hours, we will start meetings with football players, the Greek Football Federation, the Super League, we are in open communication with UEFA, and the league will not start again unless there is a framework of terms and rules agreed by all,” the sports minister said.

He added that the framework is clear, the penalties will be strict and need to be further tightened.

Meanwhile, the Greek police issued an arrest warrant against Ivan Savvidis and four more persons – reportedly his bodyguards – who entered the pitch on Sunday. Police said in a statement it is investigating Savvidis for illegal entry into the football field and for possession of an object that could cause harm.

The offense is misdemeanor and he could be arrested within 24 hours. However, Savvidis remains at large, media suggest he will surrender to police after the 24-hour deadline expires, on Monday night.

Greek media reported that the PAOK owner had a gun license.

However, guns are forbidden during football matches and even police officers are not allowed to carry guns with the exception of the squad commander, Skai TV reported.