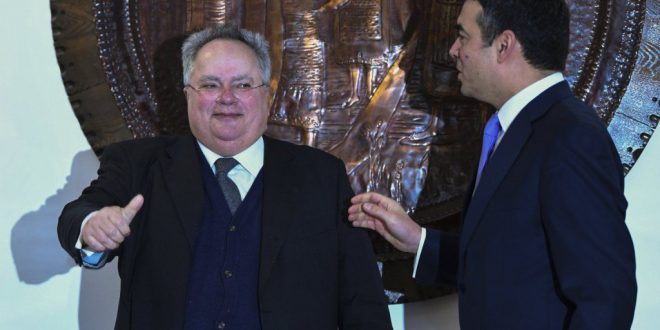 In his first historical visit to FYROM’s capital Skopje after the removal of Alexander the Great names and statues, Greek Foreign Minister Nikos Kotzias said he believes in a “honorable compromise” from which both countries will win.

“You cannot get everything you have in your mind,” he said, following lengthy talks with his counterpart Nikola Dimitrov, as efforts to find a mutually acceptable solution to the name dispute intensify.

“I deeply believe that if we manage – and we must manage – to resolve the problems, which neither I nor Nikola [Dimitrov] created […] this will allow both our states to contribute to stability, security, as well as the economic development of the region. I believe that overcoming political obstacles contributes to the economic and social development,” he said.

“We want an honourable, fair and right solution that takes into account the main interests of each side,” he added.

Dimitrov recognized the difficulties but did not exclude a change in the constitution or a composite name in one word, amna.gr reports.

He said talks were very good and more meetings are planned for the future after the one with the UN mediator Matthew Nimetz in a week.

Responding to a journalist’s question on the constitutional changes requested by Greece, Dimitrov said the two sides are trying to find a solution that will be “sufficiently good” for both sides.

Both ministers expressed their will to move forward with a solution to the name row that “will open the doors to the future”.

Both sides are scheduled to meet with UN Special Envoy Matthew Nimetz in Vienna on March 30th. both sides are expected to write down and submit to UN the points they agree upon.

Meanwhile, it seems one of the five proposed names, the name <Gorna Makedonia> [Upper Macedonia] is being qualified. During a press conference on Friday, Alexis Tsipras mentioned this name although he corrected that was not the one both sides had agreed upon. It was apparently just an example.

According to private ANT1 TV, <Gornamakedonia> will be used in one word and will not be translated.

The Greek side wants a name in Slavic language, “mainly untranslated” to avoid confusion with Macedonia in Northern Greece.

PS Confusion is hardly to be avoided as the rest of the world will call <Gornamakedonia> simply Macedonia. It is the legacy of the intermediate compromise in the early 1990’s.