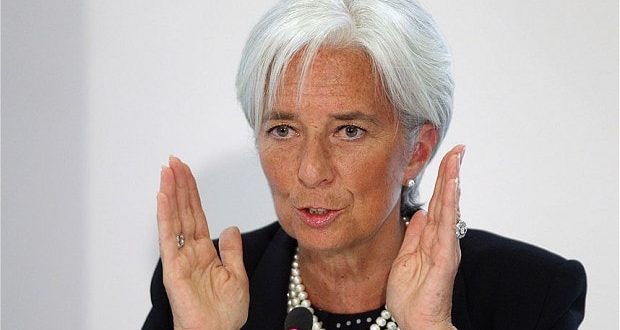 “As a high-risk state, Greece should even pay more than twice the fixed contributions to a future European Financial Mechanism Fund,” the International Monetary Fund  said in a report released on Monday. But if this mechanism existed in the years of the crisis, Greece would receive much more money (as support) than the other eurozone member states, she added. It would receive an amount of 20% of GDP, th eIMF estimated.

IMF’s managing director Christine Lagarde said that eurozone countries should set up a “rainy day fund” that could cushion members when they hit economic hard times.

“For a relatively modest cost .. a central fiscal capacity could reduce the negative effects on output by more than 50 percent” during a crisis, Lagarde said in a Berlin speech, citing findings by IMF researchers.

Countries could pay around 0.35 percent of their annual gross domestic product into the common pot, which would pay out in times of need — on condition they upheld strict spending rules. Lagarde added that “in extreme circumstances, the fund would be allowed to borrow” if it needed more financial heft to back struggling nations.

The former French finance minister’s proposals throw the IMF’s weight into a mounting discussion about how to buttress the 19-country eurozone. French President Emmanuel Macron promised voters he would renew the currency area and equip it with a centrally-managed common budget, after years of crisis hobbled growth and sent unemployment soaring.

But while he hopes for support from German Chancellor Angela Merkel’s new government, smaller fiscally conservative countries like the Netherlands and Finland fear a joint promise of support would encourage bad behaviour.

Governments could spend more recklessly if they knew they were insured against financial difficulties, critics argue, a problem known to economists as “moral hazard”. Those are “legitimate fears”, Lagarde acknowledged.

However, “transfers from the fund should be conditional on a member’s compliance with EU fiscal rules,” which limit how much debt national capitals can take on and how large a deficit they can run.

The IMF chief added that it was urgent to put tools in place now before a crisis hits. Many observers have pointed to a window of opportunity for eurozone reforms that could close by the next European Parliament elections in May 2019.

Looking back to the eurozone’s financial crisis, Lagarde said “mechanisms were not in place, we were racing against the clock” in cases like Greece’s repeated bailouts. Governments could also make a common crisis-fighting fund conditional on progress in other areas like banking sector reform, she said.

But there should be a “meeting of the minds” among leaders as soon as possible, Lagarde urged. “Give the arrival point, agree on the general principle, give a timeline, and deliver… so that there is a sense of progress and some optimism that is so badly needed,” she said.

“Markets, investors, observers would know there is a collective determination to deal with moments of crisis” after such an agreement, Lagarde said. As for actually implementing the reforms, “if it’s a matter of five years, then so be it.”