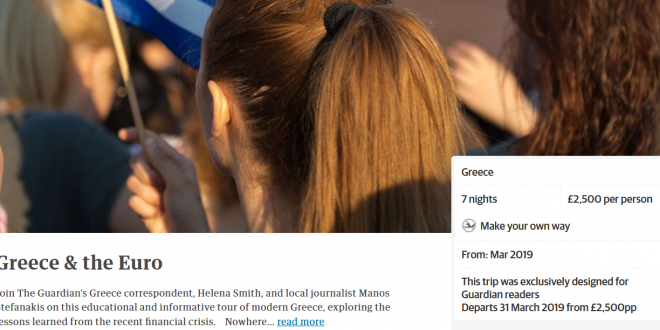 UK’s daily The Guardian has been offering vacation packages “Greece in Economic Crisis.” The 7-day trip to Greece at £2,500 per person includes touristic attractions like protests in downtown Athens and refugees on the islands hot spots.

In the company of journalists, including the daily’s correspondent in Athens, the happy but crisis conscious traveler will swill wine and then go visit Greek families who will unfold their daily drama in front of people they have never seen before and who have paid to listen to them. It is unknown whether the Greek crisis victims will get a small commission for being live witnesses of an 8-year-old economic crisis.

NGOs on the island of Samos and the port of Piraeus will explain every facet of the Refugee Crisis and drama.

Once in Athens, the travelers will discuss protests with an ex minister. 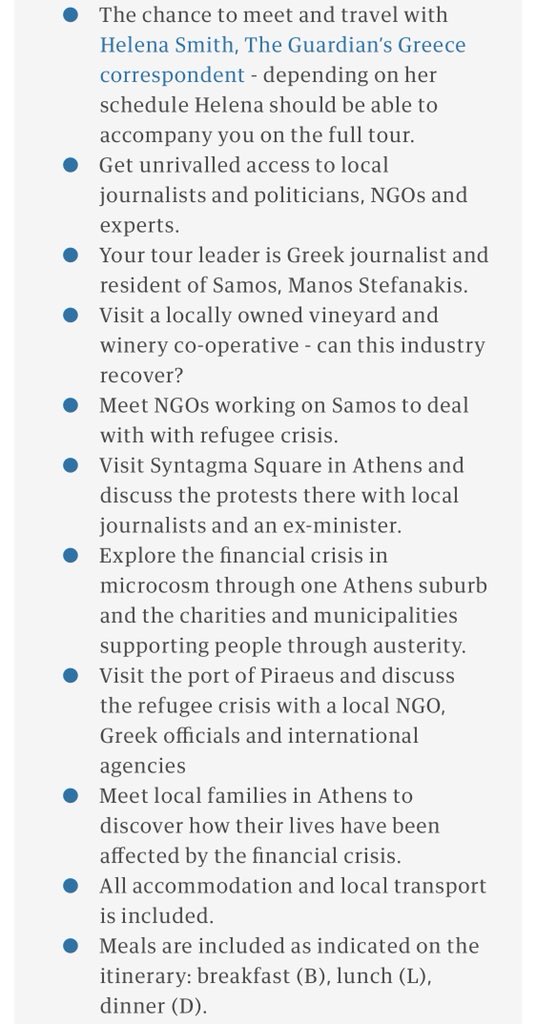 And if there are no protests on the specific tour days, KTG can organize small students’, jobless’, cleaners’ and pensioners’ demonstrations (except on days with heat wave & Sahara dust) at a fair commission of 35% of the package price.

As the tours starts on 31. March 2019, a  Greek daily may offer reverse packages under the title “Meet the Brits in Brexit.”

Nevertheless, the Guardian offer was not met with great enthusiasm at least on Twitter.

This is insane. The Guardian offers a holiday package tour for refugee & financial crisis spotting in Greece pic.twitter.com/do6U6nzT5P

@guardian @HelenaSmithGDN You should throw in a bonus package for a strikes-ridden journey. Pay something extra to pat a recently laid off cleaner on the back and take a selfie with a suicide attempt survivor! 👏

Wow, this is so tasteless. Isn’t it called poverty tourism? 🤔

@guardian poverty poor tour of Greece costs per day what many Greeks have to work a month to earn. 2,800 euros for 7 days – flights extra

I love the guardian but this is ridiculous. Offering tours in the crisis-ridden #Greece to experience ‘explore the ongoing impact of the financial crisis’. People are taking their own lives as a result of this crisis. Are you gonna show this too during the tour @guardian? https://t.co/ZysLlSxmx8

I have to note that there were similar tours offered by locals in Athens at the peak of the Crisis, somewhere in 2013, 2014, If I remember well. I have no idea, how successful these tours were and whether they are still being offered.

All though the Greek crisis I was thinking the Guardian had some kind of respect for Greece and the Greek people. Sadly, I was wrong.

Late on Wednesday, Greek correspondent in UK, Thanassis Gavos, reported
Guardian confirms that it has withdrawn Greece “crisis holiday” readers package: “On reflection we have now paused this project in order to reconsider our approach.”

Thanasis Gavos on FB: Just received this from GNM spox: “The Guardian has been working with Political Tours to provide informative trips to Greece and other countries for people who wish to develop their understanding of the political and social landscapes in these places. On reflection we have now paused this project in order to reconsider our approach.” All Political Tours/Guardian packages (Gre, Bos, Ukr) have been removed from site.”