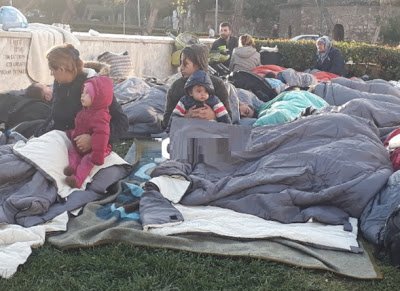 Refugees sleep in squares & parks as hundreds flock to Thessaloniki

April 20, 2018 Refugees Comments Off on Refugees sleep in squares & parks as hundreds flock to Thessaloniki 2,943 Views

Hundreds of refugees and migrants have been flocking to Thessaloniki in Northern Greece, lately, seeking an opportunity for a temporary residence in an EU country. Majority of them have reportedly illegally entered Greece from Turkey through the Evros river. They sleep in parks and squares awaiting for a place in the Greek refugee accommodation camps.

On Thursday afternoon, a group of 60 people settled with blankets and sleeping bags in the main square of the city, Aristotelous Square. Men, women and children spent the night outdoors  because they had  “no place to stay.”

The group were Syrian refugees from Afrin with legal documents allowing them to stay in Greece, local media reported, citing police sources.

They set their provisional camping already on Thursday afternoon.

By Friday morning, municipality buses reportedly arrived and transferred the refugees in camps in Diavata, while some of them were to be taken to another camp in Lagadikia.

According to local media, the city has seen an increase of refugees and migrants inflow in recent days. On Thursday alone, 150 people were seen, and dozens were at the intercity bus station ‘Macedonia.”

Local authorities imply that many have been arriving through the Evros river, the natural border between Greece and Turkey.

Thessaloniki municipality express fears that the city may experience another situation similar to the one on 2015.

Also locals recall that the situation resembles the one in 2015, when Greece in general experienced an unprecedented refugee crisis with thousands of people sleeping on the streets and the parks.

According to an associated press report last week, hundreds of refugees and migrants have been flocking to Thessaloniki in recent days “waiting for hours to be formally arrested in order to gain temporary residence in the European Union country.” Some even wait outside police stations or sleep in the parks.

Families, including many from Syria, sat on the sidewalk outside the police building for hours Friday after crossing illegally from Turkey. The majority of them has entered Greece through the Evros river.

Local and migration authorities have scheduled a meeting on Saturday in order to see how to deal with the situation.