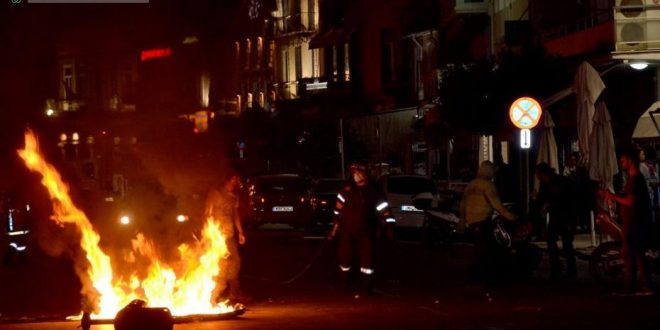 Lesvos: 17 locals to be charged for attacks against refugees, migrants and police

Police authorities on the island of Lesvos have prepared case files against 17 locals for the attacks against refugees, migrants and police officers last Sunday.  According to local media, 5 of the suspects will be charged with felony charges, while the remaining 12 will face charges for misdemeanors offenses.

The case files reportedly refer to the first group of people who have been identified as being involved in the attacks against refugees and migrants but also policemen on Sappho Square in the capital of the island.

The first case file has been forwarded to Justice authorities and prosecutor.

Earlier reports indicated that the suspects are members of the far-right who have been identified from security cameras around the square. The people on the footage are known to the small community of the island.

Chanting “Burn them alive” a mob hurled flares, firecrackers, stones and bottles at protesting men, women and children refugees. The men among the refugees had made a human chain to protect the women and the children who were peacefully protesting for acceleration of asylum procedures.

More than 35 people were taken to hospital with mostly head injuries.

Also police did not escape the hurled stones and flares.

The next day it was revealed that instead arresting the attackers, police had arrested all 120 protesting refugees and migrants for ‘illegally occupying public space’.