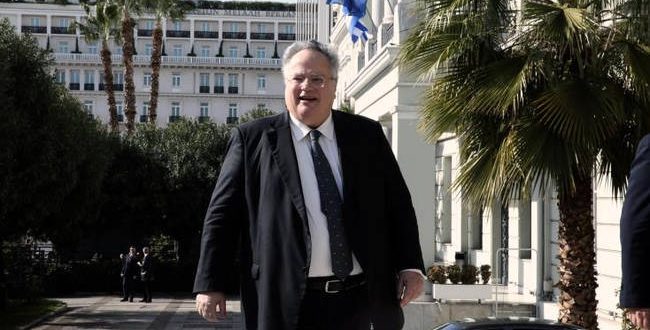 May 7, 2018 Greece, Politics Comments Off on Greek FM in Cyprus court over legal battle with Kykkos monastery 251 Views

“Even the Turks have treated us better than this,” Greek Foreign Minister, Nikos Kotzias, said expressing his dismay about the attorney representing the Kykkos Monastery before the court in Nicosia on Monday. The monastery has taken the Greek state to court over an 8,000-squater-meter land plot where the Greek state was to use for the embassy building. The monastery wants the land plot back in its possession.

“I am no dodgy mafia” and “it is a shame that the foreign minister of Greece is before the court of law,” were just two of the choicest statements from Nikos Kotzias as he was cross examined at Nicosia district court on Monday in Greece’s legal battle with Kykkos monastery.

The monastery has taken the Greek state to court over the eight stremma (8,000 square metre) parcel of land it now wants back in its possession. Half of it had been donated so Greece could build an embassy on Prokopiou street in Engomi while the other half was sold for just 500,000 Cyprus pounds in 1998.

Although the case is unprecedented enough as it is, during the court session, Kotzias outrightly accused Costas Velaris – the lawyer acting on behalf of Kykkos monastery – of being personally opposed to the bishop’s love of Greece and claimed he had ulterior motives for taking the case to court: money.

“Even the Turks have treated us better than this,” Kotzias said.

More controversially, he added: “Greece was not vilified this much during the junta.”

The case before the court now is related to an earlier legal battle between the two parties in 2017 when the court ruled that Greece should return the land to the monastery and the monastery should in turn pay back the money it received with interest – at present €2.3m.

This was because when Kykkos monastery sold the land to the Greeks, it included a clause that stipulated the land could only be used for the purposes of building an embassy.

In 2012 however, the bishop was led to believe that Greece was trying to sell the land to a company acting on behalf of the embassy of Qatar, Velaris said in court.

The court halted any potential sale until the decision.

Kotzias told the court on Monday that in March 2017 he had met with Bishop Nikiforos of Kykkos in which he claims he saw two scenarios before him.

“One was that of a God-loving man,” referring to the bishop, who with tears in his eyes said he wanted to see the flag of Greece waving before Metochi Kykkou, the Kykko monastery annex in Engomi close to the land where the Greek embassy was to be built. Against this was Velaris who was visibly opposed to Greece having the land, Kotzias said. via cyprusmail