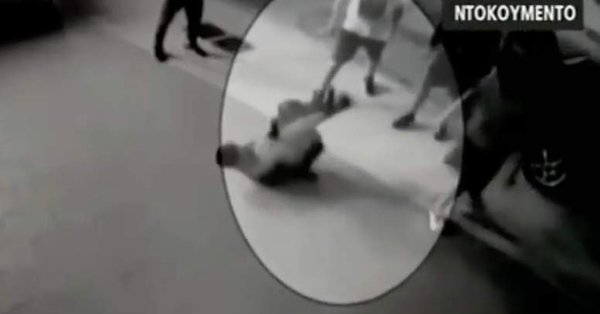 May 16, 2018 Refugees Comments Off on CCTV captures brutal racist attack against Pakistani national in Athens 339 Views

A brutal racists attack with a group of young people against a 36-year-old man from Pakistan took place in Peristeri suburb of West Athens on Sunday night.

The victim said, the attackers, some 10 people,  approached him and started to beat him for no reason.

According to his complaint to police, one member of the group threw him on the ground, the others kicked him in rage on the head and back.

The brutal attack was also recorded by a CCTV.

They did not want to steal my money or the cell phone, they wanted to kill me, the victim told private Alpha TV. The attackers were young, approximately 15 and 18 years old, the man said.

After the attack, the men fled the area.

Police is investigating the racist attack.

The victims works as cars painter and is  father of one child. He has filed a lawsuit.

According to the Movement against Racism and Fascism KEERFA, attacks against migrants have increased in the area of Peristeri and nearby Sepolia in the last three weeks.

PS Most probably there could be these racist groups of hit-and-run bullies who cannot tie their shoe lashes when they are alone, without the support of a group.