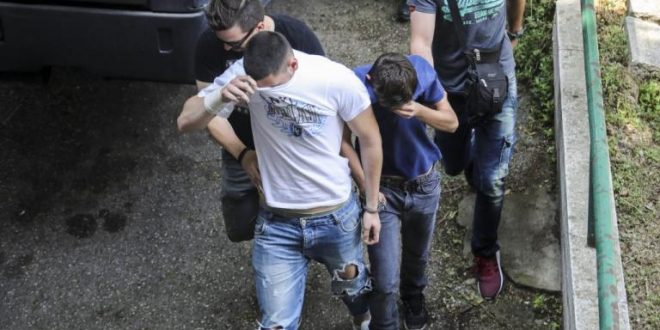 Three men sentenced for Boutaris attack, however, on suspension or bail

May 23, 2018 Society, Very Mix Comments Off on Three men sentenced for Boutaris attack, however, on suspension or bail 306 Views

The Misdemeanor court in Thessaloniki found guilty three men for the attack against the mayor of Thessaloniki, Yiannis Boutaris. The court sentenced one 20-eyar-old and a 36-year-old to 14 months imprisonment and the second 20-year-old to 21 months.

The sentence is suspended for 3 years for the two 20-year-olds. There were no conditions to suspend the sentence for the 36-year-old but the possibility of bail at 5 euros per day. The man of Greek origin from Georgia in Caucasus, was arrested on Sunday morning after he broke into a butcher’s shop together with two accomplices and stole the cash register. Ηe has a police record for thefts.

The presiding judge accepted the prosecutor’s proposal that the attack against Boutaris last Saturday was “organized.”

The defentans claimed that they were “carried away by the crowd.”

One of the 20-year-olds, a priest’s son and and trained in martial arts, confessed that he kicked the mayor. He told the court that “as a Pontus Greek he attended the event to honor the Pontus Greeks. “The crowd was disapproving and I went close to see who that person. I was taken away by foolishness,” he claimed. Media reported that the young man had gone to the hospital to get stitches on his hand he injured when he broke the window of mayor’s car. However, when he saw the mayor was in hospital, he fled.

Also the 36-year-old claimed he was “carried away” and said “I did not know whom they were beating and I went there too. I made a big mistake and I apologize.”

The third defendant said that he did not hit the mayor “but he moved towards the car following the crowd.”

Yiannis Boutaris appeared in court where he recognized one of his attackers, one 20-year-old.

Describing the nightmare he experienced being chased by an angry crowd as several videos show.

He said among others that at one point he was “kicked in the stomach.”

“When I fell on the ground I felt was being beaten everywhere. That was the moment where I really got scared,” the 75-year-old man man said.

The mayor said also that he heard slogans and signals for the attack.

“It is clear that they were tools and there was man orchestrating the attack, he was giving signals. Then he clapped his hands and all gathered around me. I have recently had a stent placement, I was afraid I’d die right there. I felt strong pain from the kicks.”

Several footage have shown indeed a man in the crowd playing a leading role in the attack.

Boutaris said that he was beaten everywhere legs, back, neck also with water bottles.

A 17-year-old has also been arrested and he will be separately tried in the Court for Juveniles in October. According to media reports, his father called in the City Hall on Monday and asked to speak to the mayor but this was not possible.

Also the lawyer of another offender sought to speak with the mayor and offered to pay to the damage of the car. The mayor refused to speak and let know them know the car was not private but belonged to Municipality and they should discussed the issue with authorities.

Six more men have been identified from rich footage material shot during the attack. Among them is reportedly a 14-year-old and the father who was attacking Boutaris holding a small child in his arms.

“>Citing “absolutely reliable information” local media voria.gr writes that one of the offenders is member of  the youth organization of far-right extremist party Golden Dawn and that one of the top GD MPs called him and offered him his support. The family of the 20-year-old rejects their son is member of the party.

The attack has been condemn by all political parties except the GD.

In contrast, far-rights and ultra-nationalists hailed the attack, while some local members of the right opposition also said Boutaris “deserved to be beaten.”

Read also KTG’s op-ed: Hailing mob attack on Boutaris is equally despicable and outrageous as the attack itself.