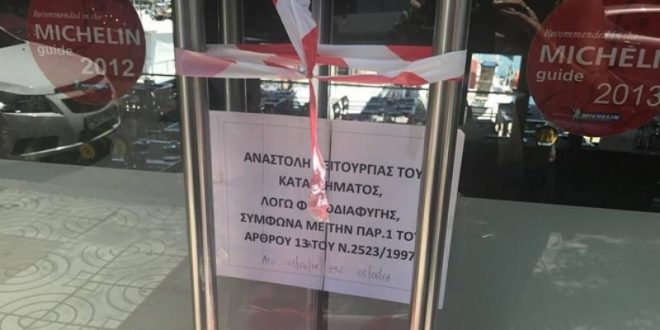 Tax inspectors from the Independent Authority for Public Revenues imposed a 48-hour suspension in the operation of One Michelin Star ‘Varoulko,’ one of the most prominent restaurants in Greece. The high quality sea food restaurant in Mikrolimano, Piraeus, fights back saying the decision was “unjust” and announces to appeal to justice.

According to media, inspectors conducted control checks on Thursday night and suspended the restaurant operation for 48 hours after they found out that one invoice worth 1,500 euros was not issued.

Media wrote that also the cash register of the restaurant was under investigation.

According to the law, public revenues inspectors proceed to 48-hour suspension of operation of a business when they catch it to have committed tax violations for the first time.

Varoulko issued a statement saying the decision was “unjust” and announced it will appeal it.

In its statement the company blamed “lack of synchronization between the order form and the final invoice that was issued in the end.”

Underlining that it will appeal the decision, Varoulko notes “it reserves also the right to claim any other legal rights against anyone responsible in order to protect its reputation and the smooth operation” of the restaurant.

Speaking to Star TV, representatives from the restaurant claimed “there was not any tax violation” but a “deliberate misinterpretation by the tax inspectors.”

The problem reportedly occurred with regards to a group of Chinese tourists dining on a fixed menu in the restaurant. It is normally the tourist operator who pays the bill, makes a down-payment, and the final bill or invoice is issued after the dinner has concluded as possible  additional consumption must be added on the bill. The procedure was not concluded, the restaurant said.

Varoulko said further it has undergone dozens of controls by tax inspectors and there was never a problem.

The One-Michelin-Star restaurant of inspired chef Dimitris Lazarou seems to be highly concerned about its reputation.

The first Michellin star was granted to Varoulko in 2002, the first ever star to a restaurant serving Greek food in Greece. It is known for its high quality sea food cuisine.

Prime Minister, Alexis Tsipras, hosted a lunch at Varoulko to honor German Foreign Minister and Vice chancellor, Sigmar Gabriel in 2017, while the Samaras government took Amal Alamuddin-Clooney there when Greece was still struggling for the return of the Parthenon Marbles.