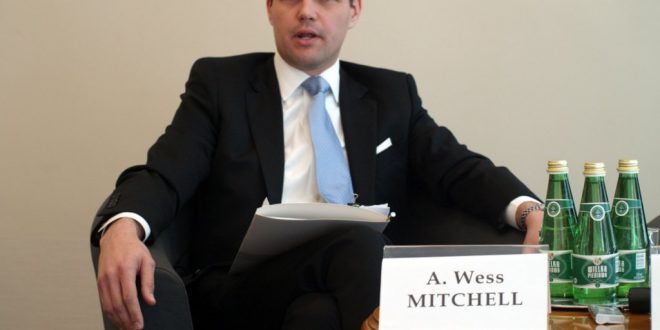 US State Dept warns Turkey over violations in Cyprus EEZ

Assistant Secretary of  US State Department for European and Eurasian Affairs, Wess Mitchell,  warned Turkey over harassment of floating drills and violations in the Exclusive Economic Zone of Cyprus. This is not something that the US will allow to go unnoticed, Mitchell said during a speech at Cypriot Heritage Foundation in Washington on Tuesday.

“We were clear in our message to Turkish officials that harassment of floating drills in the EEZ of Cyprus is not something that we will allow to go unnoticed and for which we will not talk about,” Mitchell said.

“We cannot be silent as Turkey’s leaders curb democratic freedoms and the rule of law, harangue Israel, and wield rhetoric or pursue policies that unnerve Ankara’s neighbors and our close friends, allies,” Mitchell underlined.

He added that “a major violation of this relationship will cause the destruction of many generations in US national security. In the long run, Turkey is the only country in the region with height to counter-balance Iran. It is NATO’s ally with legitimate concerns about its security, including many which we share and we must help to deal with.”

According to greeknewsonline, Mitchell stressed that the US are planning to build a stronger presence in the Eastern Mediterranean Sea and announced the return of the US in the Cyprus issue in autumn.

“We are working with Cyprus as a vulnerable state that needs greater Western attention while continuing process toward a bizonal, bicommunal federation,” Mitchell underlined .

Referring to Cyprus, Mitchell said the US is working to build a stronger relationship in the areas of countering terrorism and security.

“We are working with Cyprus as a vulnerable state that needs greater Western attention while continuing process toward a bizonal, bicommunal federation,” Mitchell underlined .

With regards to Greece, the Assistant secretary said ” We are cultivating Greece as an anchor of stability in the eastern Mediterranean Sea and the Western Balkans.”