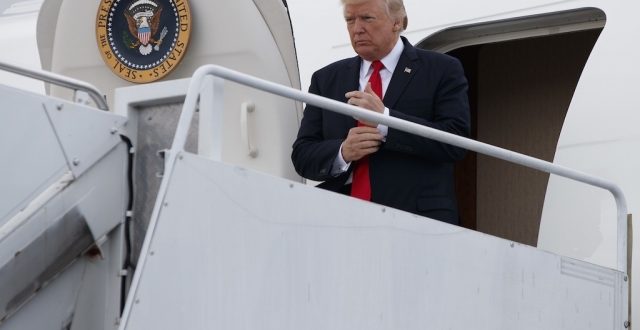 June 8, 2018 Politics, World Comments Off on US President Donald Trump on Crete short before meeting with Kim Jong Un 1,603 Views

US President Donald Trump will be on the island of Crete short before his meeting with North Korean leader Kim Jong Un in Singapore on June 12. According to exclusive information by local media, the presidential airplane, Air Force One, will land on the military base of Souda, in West Crete, for refueling.

It is not clear yet, whether the US President and the large delegation will step out of the aircraft or stay inside until the refueling procedure is concluded.

According to ekriti.gr, preparations are underway in the US section of the Souda base, for the option of a brief meeting of US President with the Command and the staff of the base. The unofficial visit is reportedly expected over the weekend.

The Souda Naval Base on Crete is a major naval base of the Hellenic Navy and the NATO at at Souda Bay in the north-west of the island.

Also known as Naval Support Activity Souda Bay, it serves as the second largest (in numbers of battleships harboured) naval base of the Hellenic Navy and the largest and most prominent naval base for the United States and NATO in the eastern Mediterranean Sea.

Taking into consideration that the Eastern Mediterranean Sea is currently on of the most crucial hot spots on the planet, the presence of Donald Trump on Souda has its own significance.