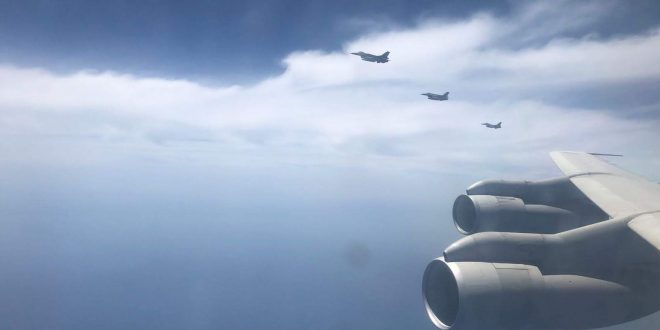 The Israeli Air Force launched a large-scale aerial exercise last Sunday in Greece, practising long-range operations and missions over unfamiliar terrain. The exercise simulated warfare in the Gaza Strip as well as on Israel’s northern border, the army said on Monday. A total of forty planes of Israel’s Armed Forces participated in the large-scale aerial exercise in Greece’s skies, meant to simulate a war on multiple fronts, including a significant bombing campaign against targets in the Gaza Strip.

A total of forty Israeli planes participated in the large-scale aerial exercise in Greece’s skies, meant to simulate a war on multiple fronts, including a significant bombing campaign against targets in the Gaza Strip.

As part of the exercise, 40 fighter jets, refueling planes and transport planes traveled to Greece, the military said.

“In the exercise, we traveled far from home to unfamiliar terrain in order to carry out a rigidly defined and precise mission, under very challenging conditions,” said the commander of the air force’s 105th Air Squadron, which operates F-16 fighter jets.

“This capability that we have, to take all of our vehicles and travel far in order to carry out a missions and then return, is something that we… are prepared to use any time it’s needed,” he said.

In a statement, the Israel Defense Forces said the purpose of the exercise was to practice long-range missions in which dozens of aircraft take part.

“The drill took place entirely in the air, without landings, and included two sorties in daylight,” the military said.

The IDF said a central aspect of the exercise was to test the air force’s ability to operate in multiple fronts at the same time. In total, hundreds of fighter jets, helicopters, transport planes, and other aircraft took part in the multi-day exercise, which also included night missions.

The aerial drill simulated warfare in the Gaza Strip, as well as on the northern front — in Lebanon and Syria — the army said.

As part of the exercise, the air force simulated a large-scale conflict in the Gaza Strip, where tensions were ramping up after a massive flareup the week before.

“As part of the southern portion of the exercise, dozens of fighter jets simulated strikes on hundreds of targets in the Gaza Strip in a short period of time,” the military said in a statement.

Though it said the timing of the exercise was not tied to the recent unrest in the Palestinian enclave, the army’s statement about the drill could be seen as a tacit threat to the Gaza-ruling Hamas terror group.

The exercise also included actual sorties over the Gaza Strip, with Israeli aircraft filming the territory.

The IDF added that the air force also practiced giving support to troops in the case of a ground invasion of Gaza.

Ps I thought Greeks were friends of Palestinians…