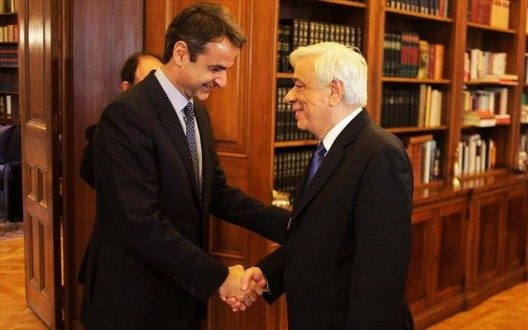 Macedonia: Tsipras struggles against political hurdles with ND & Mitsotakis being the lessen problem

The Macedonia agreement of Tuesday has triggered political turbulence in both countries. Opponents of the agreement both in Greece and FYROM speak of “treason” even though they do not know the full text of the official deal. As Prime Ministers Alexis Tsipras and Zoran Zaef prepare for the signing of the agreement in Prespes in upcoming Saturday,  Greeks organize protest rallies and the main opposition New Democracy is preparing a no-confidence vote. In Skopje, President Ivanof left Zaef in the cold and abandoned a scheduled meeting.

Kyriakos Mitsotakis, the leader of main opposition party conservative New Democracy rushed to meet with the President of the Republic on Wednesday morning. He asked Prokopis Pavlopoulos to intervene so that the government brings the agreement to the Parliament for discussion and voting before the prime ministers of the two countries sign it. However, the President has no power to intervene in the works of the Parliament or call for a plenary meeting.

Many Greeks reckoned Foreign Minister Antonis Samaras and Greece PM 2012-2014, when he brought down the government of Mitsotakis’ father in 1993 over the Macedonia issue.

On the occasion of Tzipras-Zaef deal, former PM Samaras issued a statement describing as “necessary and humiliating compromise.” The agreement give up the name of Macedonia to Skopje but also the Macedonian ethnicity, language and identity, Samaras said warning to destabilization in the region.

Kyriakos Mitsotakis left the Presidential Mansion in frustration and let media know, ND is preparing a no-confidence vote against the government. The party has no power to win such a motion even if small opposition parties like Communist KKE, far-right Golden Dawn and Centrists’ Union would join in support.

“Tsipras has no political legitimacy to approve the agreement,” Mitsotakis claimed on Tuesday evening and called on the Prime Minister to not sign what he describes as “bad and problematic agreement.”

The government replied that as elected Prime Minister, Tsipras has all the legitimate power in Greece to sign any agreements.

Some ND officials called for “snap elections” or a “referendum.”

However, the problem of  self-proclaimed “liberal reformer” Mitsotakis is his weak leadership and lack of vision. Instead of joining the government on such a crucial national issue and help work out a solution defending the national interests, he preferred to serve the ultra right-wing nationalists of his own party and therefore also his thoughtless moves. Now he is eternally exposed also in the eyes of his European partners, the EPP in the European Palriament, who have hailed the agreement.

Trouble is also within SYRIZA with former Education Minister, Nikos Filis, calling on junior coalition partner and Defense Minister, Panos Kammenos, to resign from the government. filis did not bother to inform the public with whom SYRIZA would govern if without the ANEL.

For one more time, ANEL leader Panos Kammenos, reiterated on Tuesday, that his party will not vote in favor of an agreement with term “Macedonia.” He threatened to expel party members. But on Wednesday, one ANEL MP said that he was supporting the agreement and intends to vote in favor. Will Kammenos expel the MP at risk to shrink his already small party?

Divided seems to be the Movement for Change (KINAL/PASOK) with some MPs supporting the agreement, others to disagree and some to urge “patience” until the official text is out.

Could SYRIZA ally with the 26 MPs of KINAL which is an allaicne of PASOK, To Potami and other small center-left parties? With 145 own lawmakers that could be a deal but that would mean the Macedonia issue brought PASOK full in power again.

As the political dispute continues, hardliners are organizing a protest rally at Syntagma Square on upcoming Friday and a protest also in Prespes where Tsipras and Zaef will sign the agreement.

Meanwhile some Greek far-right news papers had this creepy front page on Wednesday: the execution of PM Tsipras and FM Kotzias.

"Are there Greek patriots who disagree with this front page?" asks fascist rag that essentially calls for Greece's president, prime minister and foreign minister to be executed by firing squad over #Macedonian naming issue agreement pic.twitter.com/bzkclObwDZ

PS With all the Severna North Macedonia issue, Greeks forgot that the Parliament will pass a bill with austerity measures worth 5.5 billion euros tomorrow, Thursday.