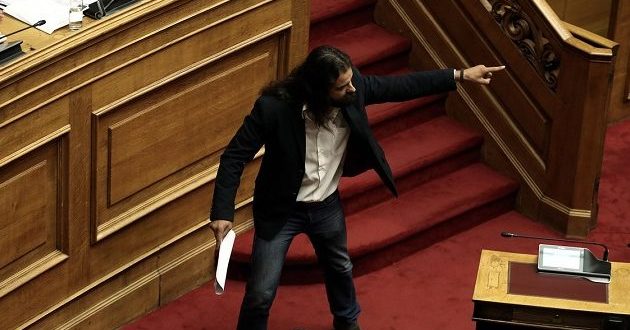 Investigation was completed in fast track, in less than 8 hours after the MP called on the army to stage a military coup and to arrest the political leadership of the country. He was speaking at the Plenary of the Parliament during the debate on the no-confidence motion submitted by main opposition party, conservative New Democracy over the Macedonia agreement.

The prosecutor has referred  the case to investigating magistrate.

Now it is up to the judge who will examine the case to decide whether he will order Barbarousis’ arrest or will call him to testify on the case, news agency amna reports.

Felony charges on “high treason” and “preparation of acts of high treason” do not require that the prosecutor asks the Palriament to lift the immunity of the MP.

Right after the investigation was launched, Golden Dawn expelled Barbarousis from the party fearing  the other 15 MPs would also face persecution as they had applauded him after his statements.

The expelled MP has currently the status of an “independent lawmaker” as he did not return his seat to the party.

Under the threat of persecution for a serious felony crime against the political system of Greece, the MP revoked his statements claiming they “were spontaneous statements that were viciously exploited politically.”

Despite earlier media claims, Barbarousis has not been arrested so far, i.e.  by 9 pm Friday local time.