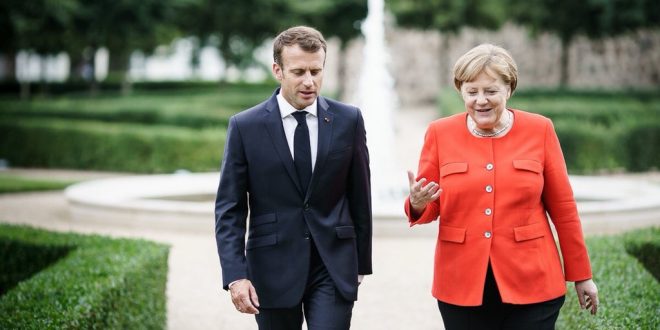 German Chancellor Angela Merkel and French Emmanuel Macron agreed on Tuesday to create a budget for the euro zone. They met at Meseberg by Berlin  and agreed also on some other EU reforms like reducing the number of EU Commissioners and take again steps on the migration crisis. The meeting, to prepare for an EU summit on June 28-29, had been dubbed a “moment of truth” for bilateral relations by France’s finance minister, as Paris has pressed Berlin for months to agree reforms to crisis-proof the bloc.

Merkel and Macron agree on:
– Eurozone budget
– transformation of ESM into ECF
– response to migration crisis can only be a European one
– need for solidarity among EU countries on migration
– reduction of illegal refugee flows
– number of EU commissioners should be reduced

France & Germany agreed to…
"explore possibilities of using majority vote in the field of the Common Foreign and Security Policy in the framework of a broader debate on majority vote regarding EU policies."

After the meeting, Merkel and Macros presented the new budget as a means of boosting the bloc’s economic competitiveness. However, they did not reveal details that are supposed to  be worked out later with other members of the 19-country bloc.

Macron said it would be operational by 2021, but their plans lacked further detail.

“We are opening a new chapter,” Merkel said after the talks, which produced an eight-page declaration entitled: ‘Renewing Europe’s promises of security and prosperity’.

Merkel said the budget would be used to strengthen economic convergence within the euro zone, which was almost torn apart by a debt crisis that took hold in 2009.

“We know that an economic and monetary union can only remain intact if economic policies converge,” she said, adding that euro zone reform was the toughest issue in the talks, which also touched on European foreign and defense policy and immigration.

We are opening a new chapter in Franco-German cooperation. 🇩🇪🇫🇷 Our guiding principle is that #Europe must find its place in a multipolar world – when it comes to our values, peace or environmental protection. Chancellor #Merkel with President @EmmanuelMacron in #Meseberg pic.twitter.com/1l1WRLVw5m

French President Macron, who last September laid out a sweeping vision for euro zone reform, defended the agreement when pressed by journalists.

“It will be a real budget, with annual revenues and spending,” he said. “This is a political commitment we make together which will require technical work at the ministerial level by the end of the year, and then indispensable treaty change the year after.”

National contributions and European resources would be used to fund the budget, the leaders said in the declaration. Macron said its size and details on its financing would be hammered out by ministers before the end of the year.

At the end of  Tuesday, it turned out that Macron came to help Merkel in the migrant crisis with her sister party CSU, while she had to give something in return: to agree with Macron’s  plans to reform the eurozone finances.

“Mean” Europeans criticize, though, that Germany and France agreed on something without consulting with the other 17 eurozone member states. They even dare speak of “lack of democracy” in decision making.

But we have been knowing this since the begin of the euro crisis in 2008, don’t we?