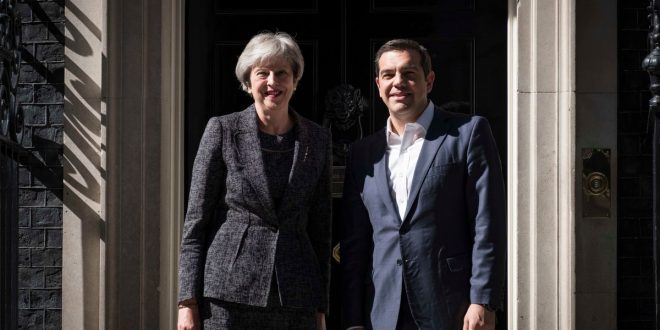 June 26, 2018 Greece, Politics Comments Off on PM Tsipras tells Theresa May the place of Parthenon Marbles is in Greece 507 Views

Prime Minister Theresa May welcomed her Greek counter, Alexis Tsipras, at 10 Downing Street on Tuesday afternoon. The two leaders discussed about issues like the Brexit, migration and bilateral cooperation. The Greek Prime Minister brought up also an issue that for Greece has never given up the fight: the Return of the Parthenon Marbles.

The natural place of the Marbles is in the Parthenon, where ancient Greeks gave birth to a global cultural heritage, Tsipras reportedly told the British Prime Minister.

Tsipras is the first Greek prime minister to officially visit the United Kingdom in decades. Therefore, May described the visit as “historical” and referred to the historical ties between the two countries.

Greek PM #Tsipras met with PM #May. Migration, closer cooperation of the to countries as well as the return of #ParthenonMarbles to Greece we're discussed pic.twitter.com/PG8eocu6FU

The two leaders discussed the migration issue right at the begin of their meeting and talked about the pressure Greece came under on this matter.

Alexis Tsipras stressed that his visit was taking place in an extremely important period for Greece due to the end of the fiscal adjustment program. He stressed the role that Great Britain plays as a global economic power, noting that now more than ever the two countries need to strengthen their economic ties. He added that bilateral ties have to strengthen at all levels and made also reference to cooperation in the defense sector.

Tsipras said that Greece faced and managed major challenges in recent years and referred also to the challenge the UK faces following the decision of its people for Brexit.

"I believe there is potential for a closer relationship between Greece and the UK", Greek PM Alexis Tsipras said after meeting with UK PM Theresa May. @theresa_may @tsipras_eu @PrimeministerGR pic.twitter.com/9Mg9EETrwR