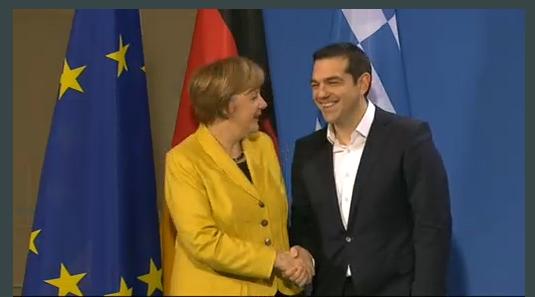 Greece ready to sign deal with Merkel to take back migrants, says Tsipras

Greece’s Prime Minister, Alexis Tsipras, is about to make a present of a very special political kind to German Chancellor Angela Merkel: He will give her a helping hand, sign an agreement with her to take back asylum seekers and save her fragile coalition with anti-migration CSU. Tsipras said he was open to a special agreement with Berlin to curtail the “secondary movement” of asylum seekers who arrive at the EU’s southern border but then journey north to Germany.

Athens is open to a deal with Berlin, Alexis Tsipras told the Financial Times in an interview published Wednesday, just hours ahead of the EU Summit. He said, he was open to a special deal with Berlin to reduce the number of asylum seekers who arrive in Greece and then head to Germany.

“We don’t care about the fact that maybe we’ll have some returns from Germany if this will help, in order to give the signal to the smugglers [that Europe is tackling illegal migration flows],” he said.

“We have to find a way, in the framework of the international law, to share the burden and to not have this unfair position for the frontline countries but also for Germany … because it’s not fair all these people to go to Germany, if we believe that this is a European problem.”

Such a deal with Greece would be a win for Chancellor Merkel, who has been under pressure from her Bavarian CSU allies to implement tougher border policies.

CSU leader and Interior Minister Horst Seehofer’s plans to turn asylum seekers away if they are already registered in another EU country have threatened to tear apart the party’s longstanding alliance with Merkel’s CDU. He agreed to give Merkel more time to try to reach deals with other EU countries at the summit.

Still, Tsipras said in the interview that a deal with Germany would not have a significant impact on Greece because only about 50-100 asylum seekers cross the country’s northern border each month.

“For us it is not the problem,” he said.

He also said any potential deal would be linked to his government’s desire to address migrant families who have been split up, with some stuck in Greece and some traveling further north. Tsipras said there are about 2,500 people in such a situation in Greece.

PS No, we won’t get something in exchange. We are large.