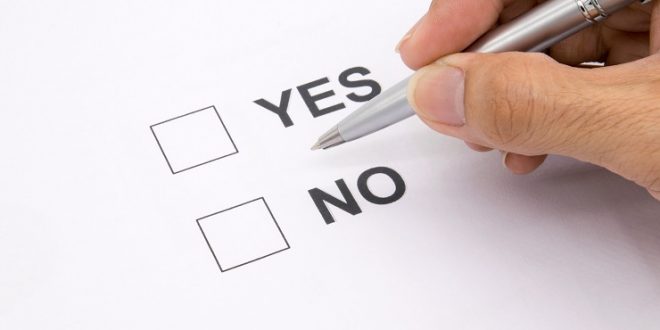 July 1, 2018 Greece, Politics Comments Off on Greek gov’t is considering to hold a referendum in upcoming autumn 937 Views

Greece’s ruling party SYRIZA is allegedly considering to hold a referendum in upcoming autumn, most likely in November. According to ‘secure’ information by the Sunday edition of newspaper Eleftheros Typos, the ruling left-wing party is hurrying up to close as many fronts as possible, both internal and external and implement its tough strategy for the next elections expected to take place in autumn 2019.

According to an exclusive report of Eleftheros Typos, the proposal for a referendum has been already on the table and will refer to a constitutional revision that would provide the separation between the state and the church.

Given the public opinion polls results, SYRIZA is not expected to win any electoral contest in the next ten months. The referendum could provide him with a significant political superiority over its opponents.

“In the referendum will be false dilemmas and fake fronts. The referendums are popular process and an environment in which populism is booming, “a senior left-wing official told the newspaper.

The possibility of holding a referendum in the autumn is considered by team around the prime minister, Alexis Tsipras, as a powerful weapon in the hands of SYRIZA, as it would surprise the opposition parties and could also trigger new turmoil in both conservative New Democracy and the Movement of Change (PASOK & others) , especially on the issue of the separation of state-church.

From such a process, it is estimated that SYRIZA could obtain significant political benefits. In the government camp they estimate that even if SYRIZA is defeated in the next election, it must be done with as little loss as possible in order to save Tsipras’ political capital and to be the main political power of the center-left in Greece.

With the referendum, Alexis Tsipras seeks to achieve three goals:

I don’t know whether Tsipras could win a referendum to separate state from church in a mainly conservative Greece, especially when the populist slogan “homeland-religion-patriotism” has been extensively used and misused due to the Macedonia name issue and the agreement with FYROM.

A risky decision, if it’s true. But it could manage to unite progressive forces.

Anyway, on the latest political developments in Greece, leader Stavros Theodorakis has proposed that To Potami withdraws from The Movement of Change (KINAL).

For one more time, Tsipras coalition partner, Panos Kammenos, reiterated that ANEL will never accept term “Macedonia” in FYROM’s name and threatened his party will withdraw form the coalition once the Agreement is in Parliament for voting.

According to public opinion polls, both ANEL and To Potami may not reach the 3% threshold and enter the parliament in the next elections.